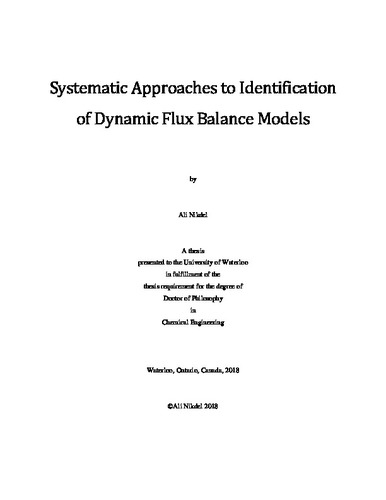 Mathematical modelling of biological systems is an essential tool for better understanding and for optimizing biological processes. Simulating the experiments before performing them is a time-saving strategy when seeking for optimal operating conditions. Dynamic flux balance analysis (DFBA) is a constraint-based dynamic modelling approach where the cell is assumed to act as an optimizing agent that allocates resources to maximize/minimize a suitable biological objective. In this modelling approach a linear programming (LP) problem is solved at each time interval involving the optimization of an objective function subject to constraints. This is a significantly different modelling approach than the one generally adopted for biochemical systems where dynamic mass balances are formulated for each metabolite. An important advantage of the dynamic metabolic flux models as compared to the more conventional models reported before is that DFBA models do not depend heavily on accurate kinetic information. The ultimate purpose of this research was to develop DFBA type models with a minimal number of parameters to fit and predict experimental data. Two main challenges had to be addressed: (i) - finding the biologically meaningful objective function that cells are trying to maximize/minimize and (ii) - finding a minimal set of limiting constraints. Limiting constraints includes any limit that potentially reduces the solution space such as kinetics, thermodynamics, gene expression, etc. The focus on this thesis was to develop algorithms to address these challenges in a systematic fashion. In the first published paper from this thesis (Chapter 5), I present two approaches for finding the kinetic constraints, an algorithm based on Lagrange multipliers and a parametric sensitivity algorithm. Both algorithms were applied using two case studies, one for E.coli that used a simplified metabolic network and a second for B. Pertussis with a more comprehensive metabolic network. Although both algorithms were capable of finding the constraints for the simple E.coli example, for the more complicated metabolic network used with B.Pertussis, the parametric sensitivity approach was found to be inefficient and numerically challenging. Thus, it was concluded that the Lagrange multiplier approach is preferable when considering metabolic networks of large dimensions. In the second paper published from this work (Chapter 6) I proposed a method for systematically and simultaneously finding the objective function and the limiting constraints necessary to describe data. To that aim, a set based approach that accounts for the errors in the experiments were proposed. Using this method both the active kinetic constraints and biological objective function were identified simultaneously using a bilinear optimization formulation. In the final stage of this research, the developed algorithms were applied for building a DFBA model for CHO cell culture (Chapter 9). We systematically found an objective function for mammalian cells that involve the simultaneous maximization of growth and minimization of apoptosis. We argued in this part of the work that this objective function correlates well with reported phenomena for CHO cells including the occurrence of the Warburg effect that involves the preferable conversion of glucose to lactate. In terms of experimental work we conducted an initial study to investigate the damaging effect of effect of CO2 accumulation on CHO cell culture. This preliminary study motivated us to develop a perfusion process for high cell density culture of CHO cells based on an ATF filtration system. In this development work we identified different challenges for effective perfusion operation and we propose some practical measures to address these challenges.