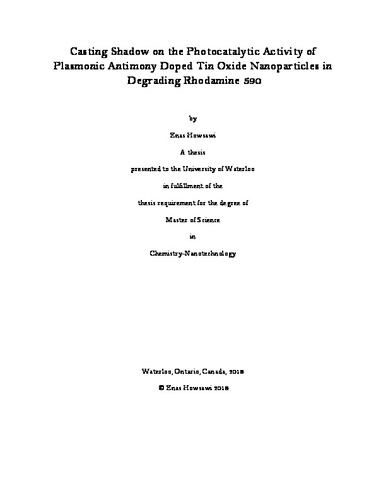 Increasing the feasibility of water purification systems at the manufacturing, technical and material engineering level is an urgent matter that is of global interest. Concerning materials engineering for water purification via water splitting, numerous studies have been done to match the ever-increasing demand in that field and finding new economically feasible solutions. A way to achieve lower cost and higher efficiency is to switch from the highly delicate processing procedures of thin films to nanostructured materials prepared by solution-based method. For that purpose, nanomaterials have specifically shown remarkable activity when studied under ultraviolet illumination. Indeed, utilizing UV as an excitation source for photocatalysis has its drawbacks since UV radiation constructs only about 5% of the solar radiation, making many of the studied systems inefficient unless an artificial UV source is present. One solution presented in this thesis is engineering a system that can utilize the most abundant portion of the solar radiation: the infrared (IR) radiation. However, the challenge remains because IR radiation is very low in energy and cannot excite valence band (VB) electrons through the band gap (Eg) for most nano-systems. In this regard, a successful IR photocatalytic study relies upon finding a suitable candidate with adjustable parameters to work efficiently under IR excitation. Antimony doped tin oxide (ATO) was selected as a model system that can respond to IR excitation by absorbing IR energy and stimulating a collective oscillation of conduction band (CB) electrons. Materials with such a feature are often referred to as plasmonic and the frequency that matches the incident IR resonance is called local surface plasmon resonance (LSPR). Given that IR radiation is also associated with thermal emission based on Black Body Radiation Theory, the LSPR electrons in ATO are supposedly responsive to thermal emission from their surrounding medium. The deliberate incorporation of antimony atoms into the matrix of SnO2 is a fundamental component in creating a plasmonic system. Greenish ATO nanoparticles (NPs) grow darker in color upon increasing the dopant concentration which is attributed to the increasing population of CB. In this system, Sb5+ played the main role in increasing the CB occupancy whereas Sb3+ had an adverse effect on the free electron population. When the NPs were subjected to high temperatures below the melting point of ATO, the color turned bluish indicating a higher electron density in the CB. The photocatalytic activity of moderately doped samples did not always demonstrate a thermal-IR response. The results marked the importance of freeing-up the surface sites for incoming dye molecules, in this case Rhodamine 590 (Rh-B). Aside from having a small surface area, annealing highly doped ATO samples allowed them to perform the photocatalytic reaction by successfully employing their LSPR property. The small surface area is an undesirable feature in photocatalytic studies but in this circumstance, it served as a confirmation that the degradation of the dye is not adsorption related. However, further annealing beyond 600℃ can negatively impact the photocatalytic reaction by increasing antimony occupation of the surface and limiting the sample’s activity to adsorption. This underlines the importance of the treatment conditions. For further elucidation of thermal-IR response, the temperature of the studied medium was modified several times to draw a correlation between thermal activation and degradation rate. It is important to mention that samples labeled as photocatalytically inactive were not able to show such correlation which further confirmed the conceptual hypothesis. The mechanism of Rh-B degradation via thermal-IR activation was elucidated from the results of scavenger experiments. The degradation reaction was suppressed using an electron scavenger, emphasizing the role of electrons in the degradation process and further supporting the argument of thermal-IR activation. Also, there was a clear difference between the photocatalytic activity of active 12% doped ATO annealed at 600℃ and inactive as-synthesized SnO2 and 6% doped ATO annealed at 800℃. Remarkably, the photocatalytic activity of the latter two samples under UV was found to be suppressed in the presence of a hole scavenger. These results demonstrate the possibility to design and control the plasmonic properties of metal oxide NPs to perform a photocatalytic reaction at the desired temperature and with the use of IR spectral range. In broad vision, this work is expected to stimulate future research on IR and plasmon-related photocatalytic studies.