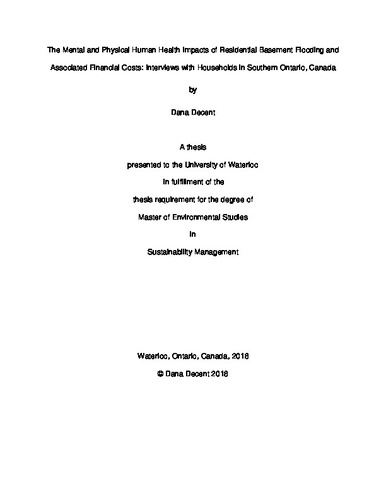 This thesis summarizes primary research conducted on the mental and physical health impacts associated with residential basement flooding and their associated financial costs (e.g. days off work, visits to health services, medication use). This thesis focuses on residential basement flooding because flooding has become the costliest of all extreme weather events in Canada, as it increases in frequency and severity. The three research questions of this thesis are: 1. What are the short-term and long-term mental and physical health impacts associated with residential basement flooding? 2. What are the attributes affecting vulnerability to identified health impacts? 3. What are the mental and physical health financial costs associated with residential basement flooding? This author interviewed 100 residents in flood-impacted neighbourhoods in Burlington, Ontario, a city where over 3,500 homes were flooded in August 2014 (Conservation Halton, 2015). The author interviewed 58 residents, who had experienced basement flooding, in reference to health impacts realized within the first 30 days of flooding, and those realized anytime after those first 30 days. A total of 42 residents who lived in the same neighbourhood but had not experienced flooding in their home formed the control, and the author interviewed them in reference to specific health impacts realized in the last three years since flooding. In response to the first research question, the thesis found that there were significant mental health impacts (increased worry and stress) realized both in the first 30 days of experiencing flooding and approximately three years later. This suggests that there are both short-term and long-term mental health impacts associated with residential basement flooding. In response to the second research question, there were several attributes identified in this study that significantly correlated with higher worry and stress. These attributes included age (adults and seniors from flooded households exhibited higher worry and stress than adults and seniors in the control), water height, difficulty contacting an insurance provider, and worsening of existing health issues. In response to the third research question, the study found that over half (56%) of flooded households that had at least one working member (n=25) took time off work, and the average time off work was seven person days per household. This is substantially higher than the average for Ontario in 2014 (<1 day), suggesting that residential basement flooding significantly affects productivity for workers. Almost half (49%) of flooded households did not have full property and casualty insurance coverage. Additional research could build on this study through examination of medical data and health claims in flood-impacted communities to further explore financial costs resulting from the health impacts of flooding. Additional research in another community with a different socio-economic background could help to determine the breadth of applicability of the study findings. This thesis provides insight into the real worry, stress and financial impact that flooding can cause for households. As flooding increases in frequency and severity (Insurance Bureau of Canada, 2017a), this thesis provides additional urgency and rationale to implement flood mitigation measures in Canada to secure homeowners’ peace of mind and reduce financial costs that otherwise may escalate in the years to come.