God, Country, and Christian Conservatives: The National Association of Manufacturers, the John Birch Society, and the Rise of the Christian Right 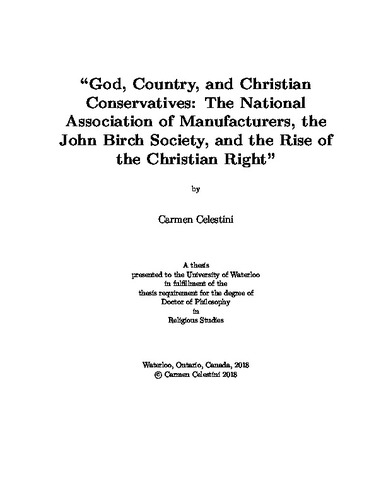 According to the First Amendment of the United States of America, religion is to be separate from the State, yet the heart and faith of voters cannot always be separated from their choices in the polling booth. Media, social groups, and emotions such as fear can impact an individual’s choice for a political candidate. This dissertation examines a historical timeline, from the 1930s to the early 1980s, of the interactions of corporations, wealthy individuals and religious leaders. These individuals created a strategic plan to politically mobilize a percentage of conservative Christians, through a Christian libertarianism that reflected a Christianity in support of free enterprise and limited government. In particular, I highlight the influence of the National Association of Manufacturers on the John Birch Society, and the Society’s impact on the Moral Majority and the Council for National Policy. In essence, this dissertation argues that the John Birch Society was foundational in the creation of the rise of the Christian Right in America. Through the use of conspiracy theories linked to Christian apocalyptic thought, the JBS, which was at the time under the leadership of Robert Welch, was able to use morality issues and a perception of declining American morality to incite fear into the hearts and minds of some conservative Christian voters. These morality issues would become the foundation for “culture wars” in the coming decades and a basis for the Moral Majority to instigate a voting bloc for Ronald Reagan in the 1980s. Previous scholarship on the JBS has not included its important role in the rise of the New Christian Right, nor its role in the creation of culture wars issues prior to the late 1960s. This dissertation highlights the role of the overlapping belief systems of conspiracy theories and apocalyptic thought in the mobilization of conservative Christians by corporations, wealthy individuals, and religious leaders to elect “truly conservative” candidates supportive of a Christian America that is representative of a Christian libertarian state. iv

Carmen Celestini (2018). God, Country, and Christian Conservatives: The National Association of Manufacturers, the John Birch Society, and the Rise of the Christian Right. UWSpace. http://hdl.handle.net/10012/13361