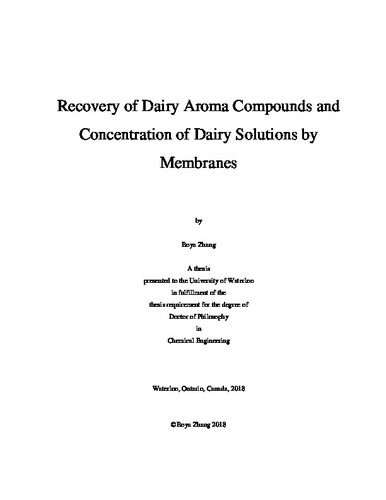 This study explores the potential of using different types of poly(ether block amide) (PEBA) membranes for recovering aroma compounds from dairy solutions and concentration of dairy products by membrane processes. The selective recovery of eight aroma compounds from their binary and multicomponent aqueous solutions by pervaporation using PEBA 2533 membrane was studied. This membrane was proved to be effective for recovering not only hydrophobic aroma compounds but also hydrophilic ones, which were not easy to be enriched by other organophilic PV membranes. The effects of feed concentration and temperature on aroma recovery were also investigated. In addition, the coupling effect among aroma species was found to be significant in multicomponent aroma system, even if the aroma concentrations in feed were low. The performance of PEBA 2533 for recovering aromas by batch pervaporation was evaluated, and the experimental data were analyzed with a batch pervaporation model. The maximum amounts of almost pure aroma compounds obtained in the permeate during the process were predicted. The effects of initial feed amount and membrane area on the recovery of aroma compounds from their aqueous feed solution were also simulated, and a large membrane area and/or a small initial amount of feed solution were found to be favorable to for a good aroma recovery. Four non-volatile dairy components, that is NaCl, lactose, whey protein and milk fat, were confirmed to influence the recovery of aroma compounds from their aqueous solutions. It was found that the permeation of hydrophobic aroma could be enhanced by the presence of NaCl in the feed, but reduced by the presence of lactose, protein, and fat in the feed. PEBA 1074 membrane for pervaporative concentration of dairy solutions was investigated by comparing the performance of PEBA 1074 with that of representative ultrafiltration, nanofiltration and reverse osmosis membranes. The PEBA 1074 membrane showed a high water permeance and a low flux decline with time during the operations. A high milk solid retention (almost 100%) was obtained, and the membrane was easily cleaned. The effects of feed solid content and transmembrane pressure on membrane filtrations were revealed using the resistance-in-series model. At a higher feed solid content and transmembrane pressure, the resistance of membrane fouling was higher, which lead to a more rapid flux decline.