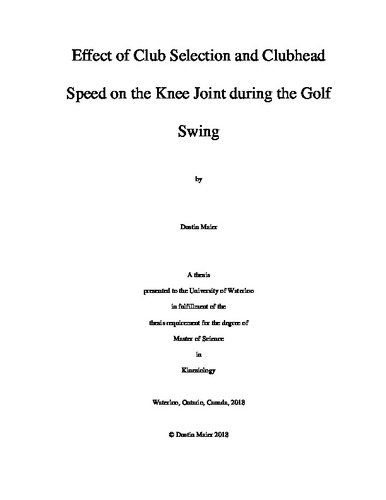 Golf is a sport that can be played throughout one’s lifetime providing an opportunity for competition, socialization, and improved physical activity. Golf is commonly recommended by physicians to those with knee ailments, under the assumption given that golf is considered a low impact sport. Previous research shows large forces and moments in the frontal plane of the knee, with magnitudes high enough to cause concern for injury and progression of overuse/degenerative conditions, especially with repeated exposure. In addition, changes to the golf swing across clubs have been seldom analyzed, while variations in clubhead speed using multiple clubs have yet to be investigated. Because shot ranges overlap between golf clubs, multiple clubs could be used for a given shot. A certain club’s shot distance at given speed can also be achieved by using the next longest club in the set and swinging 6 mph slower. The purpose of this study was to determine if male golfers with a handicap below 18 can reduce their peak frontal plane moments by swinging 6 mph slower while using the next longest club in the set. It was hypothesized that swinging slower with a longer club, would reduce the peak adduction and abduction moments at the knee joint. Kinetics and kinematics of the lower body were analyzed from 11 intermediate to highly skilled participants (handicap: 10.1 ± 6.3) during the golf swing using 7 golf clubs (Driver, 4i, 5i, 6i, 7i, 8i, and 9i) and two participant-specific clubhead speeds (normal and slow). The normal speed was defined as the participant’s self-selected clubhead speed, while the slow speed was set as 6 mph slower using the paired longer club. Normal (N) and slow (S) clubhead speed pairings of adjacent clubs were analyzed, including 5iN/4iS, 6iN/5iS, 7iN/6iS, 8iN/7iS, and 9iN/8iS. The shape of the moment waveforms were consistent within and between participants. Peak knee adduction moments ranged from 0.86-0.95 Nm/kg (N), and 0.84-0.9 Nm/kg (S). A two-way ‘condition (2) x pair (5)’ repeated measures analyses of variance was used to address the hypotheses. Peak abduction moments ranged from 0.58-0.77 iv Nm/kg (N), and 0.52-0.56 Nm/kg (S). There was a main effect of condition, but not of pair or an interaction for the peak abduction moments (P<0.05). There was no main effect, of condition or pair, or interaction for the peak adduction moments (P>0.2). While not statistically significant, peak adduction moments were lower with the slower swings. The magnitudes of these frontal plane moments are greater than those previously reported, potentially indicating differing swing mechanics compared to this study, resulting in altered kinetics of the lower limbs during the golf swing.