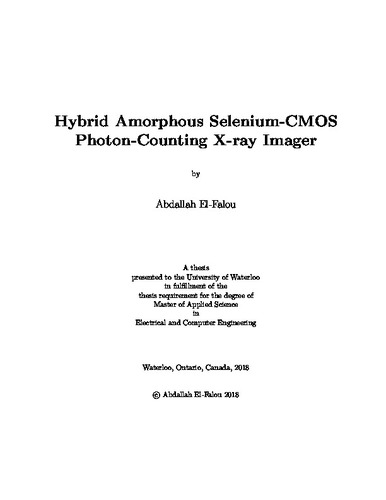 Many medical imaging modalities, such as mammography and micro-computed tomography, utilize digital X-ray imagers to observe human anatomy. Direct digital X-ray imagers rely on a sensor layer (typically a photoconductor) to convert X-ray photons to electrical charge, which can then be collected by pixel readout circuits. Whereas traditional integration-mode X-ray imagers typically integrate charge for long durations to acquire image frames, X-ray photon-counting imagers (PCI) resolve each incident photon as it arrives. This allows for equal energy-weighting of photons and multi-spectral image capture, both of which enhance contrast in images. Furthermore, PCIs also allow for higher dynamic range since count rates are not limited by integration well capacity. Many hybrid X-ray PCIs have been reported in the literature using photoconductors such as CdTe and HgI₂. However, these photoconductors are expensive to fabricate, suffer from low yield over large areas, and have limited spatial resolution. This thesis describes the design and characterization of the first hybrid X-ray amorphous selenium–CMOS PCI for mammography and micro-computed tomography. Amorphous selenium (a-Se) can be thermally deposited over large areas, allowing for cheaper and scalable fabrication as well as higher spatial resolution. Two arrays of 26 × 196 pixels are implemented in CMOS and interface directly to an a-Se sensor layer. Counter arrays neighbor the pixel arrays and have a one-to-one relationship with pixels, incrementing every time a photon is detected. Novel readout circuits allow for ultra high-resolution pixels, each occupying only 11.44 × 11.44 μm². Finally, the design of a custom PCB and FPGA system for characterizing the electronic performance of the PCI is described. The measured input-referred noise and threshold spread of the PCI are 41 e-rms and 107 e-rms, respectively, when operating the imager as a row scanner. This will enable an energy resolution of 5.7 keV, suitable for the proposed applications. Further analysis was done to identify methods of reducing threshold spread as well. Finally, the concluding chapter summarizes this work, compares its performance to other PCIs in the literature, and identifies future work to improve its performance.