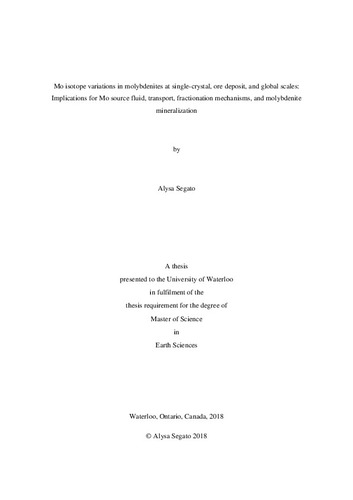 In this study, the Mo isotopic composition (δ98Mo) of molybdenite from 29 hand samples from various ore deposit types was analyzed. This data was compiled with data from the literature and all data (n = 420) was reported relative to international standard NIST SRM 3134 = 0.25‰ for comparison. Using this larger dataset, the range of δ98Mo in porphyry deposits is greater, and it was determined that the δ98Mo of molybdenite cannot be used to fingerprint the age of a deposit or the deposit type. Higher temperature deposit types (granite = 0.10‰, n = 25, 2SD = 1.03‰; porphyry = 0.20‰, n = 243, 2SD = 1.01‰; skarn = 0.36‰, n = 42, 2SD = 0.70‰) have generally lower δ98Mo than lower temperature deposit types (pegmatites = 0.48‰, n = 80, 2SD = 1.05‰; perigranitic = 0.75‰, n = 10, 2SD = 1.12‰; greisen = 0.79‰, n = 6, 2SD = 1.93‰), consistent with findings from earlier molybdenite δ98Mo compilations. Therefore, temperature can be considered as one control on Mo isotopic composition. The average δ98Mo of molybdenite is 0.37‰ (n = 479; 2SD = 1.30‰), which is similar to a recently estimated maximum δ98Mo for the upper continental crust of 0.40‰ and likely represents a maximum for the average bulk continental crust δ98Mo. The δ98Mo of the molybdenite samples from various deposits was compared with Re concentrations and S isotope compositions (δ34S). Consistent with earlier compilations based on a smaller dataset, an overall negative correlation was found between δ98Mo and Re concentration, which implies that the Mo source fluid is another important control on the Mo isotopic composition. Samples with a high Re concentration and a low δ98Mo suggest a mantle-derived source fluid whereas samples with high δ98Mo (>1.5‰) had uniformly low Re concentrations that suggests a crustal-sourced fluid. The relationship between δ98Mo and δ34S was also investigated as a positive correlation between these isotope systems in ore-forming systems with limited S and Mo availability would indicate Rayleigh distillation as a main mechanism of Mo isotope fractionation. No such relationship was observed, indicating that other fractionation mechanisms such as redox changes are important. To test the hypothesis of small scale zoning, molybdenite grains were cut parallel and/or across cleavage planes and analyzed. The variation observed at the single-crystal scale was within the long-term reproducibility of Mo isotope analyses (~0.1‰; 2SD = 0.2‰). Several hand samples were collected from the Berg epithermal-porphyry deposit (British Columbia) and the Hemlo disseminated Au deposit (Ontario) to quantify Mo isotopic variation at the deposit scale. At the Berg deposit, modest variation in δ98Mo was observed (~1‰). At the Hemlo deposit, Mo isotope fractionation exceeded 5‰, which is greater than the range previously reported for any other deposit type and indicates significant Mo remobilization. The mineral assemblages, trace element composition, and the abundance of pyrite in the Hemlo hand samples do not correlate with the Mo isotopic composition of bulk samples. The observed Mo isotope fractionation is likely due to alteration of the host rocks by S-rich reducing fluids.