Cauldron of Forces: Designing a Lightning Observatory on Lake Maracaibo 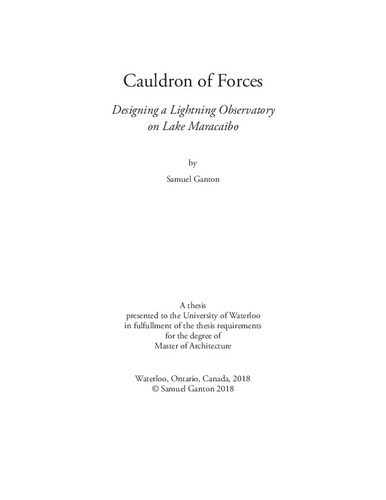 There are storms in the world, and the world is a storm, and we ourselves are weather. Earth and the universe are continually emerging and dissolving: geological, meteorological, and biological forces interact to create planets, storms, and living creatures, which cycle from one form to another. What seems static is simply moving slowly. Everything is weather. As an example, take the Maracaibo Basin in western Venezuela, a 50,000 km² valley where wind, water, oil, and mountains are fused in a single turbulent system. The Catatumbo Lightning burns overhead, dominating the scene. Nearly every night for centuries there has been a thunderstorm over Lake Maracaibo – a persistent, recurring weatherform that has shaped cultural memory and mythology in the region. Below, the lake is the centre of Venezuela’s oil extraction operation. Wellheads dot the surface of the lake, threaded by a labyrinth of leaky underwater pipelines. All these phenomena have their genesis in the geological processes that shaped the basin. The uplift of surrounding mountain ranges has depressed the valley, freeing deep reservoirs of oil and trapping them close to the surface. The same mountains funnel low-level winds sweeping south from the Caribbean and create favourable conditions for thunderstorms. This thesis wrestles with the complexity of the Maracaibo Basin through storytelling and design. Part One is a cosmic history, tracking the spatial and cultural metamorphosis of the valley. Part Two is a design investigation into architecture’s capacity to frame an encounter with wild weather. Through the speculative design of a thunderstorm observatory sited near the epicentre of the Catatumbo Lightning, it asks: what kind of architecture might participate in cycles of transience and change, rather than obscuring them? How might architecture extend sensory perception and become an instrument for connecting humans more completely to the storm that is our world?