Towards the Development of Thermoresponsive Starch Films 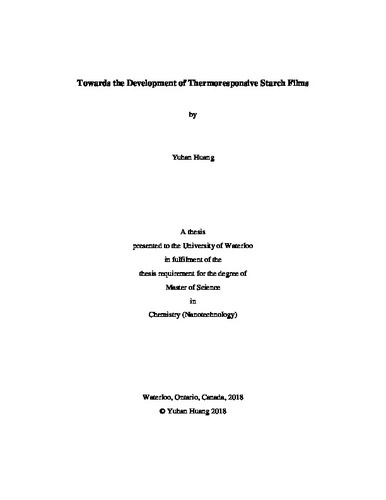 Wound dressings are an important part of the global wound care market. In addition to having desirable physical properties such as flexibility and gas permeability, it is also important that they be easily removed. As wound dressings tend to stick to wounds due to the reduction of exudate, the removal of the dressing can be painful and cause secondary injuries. This issue can be minimized by using thermoresponsive (TR) materials. At body temperature, TR dressings are designed to be hydrophobic and adhere strongly to a wound, but upon cooling below body temperature they become hydrophilic and adhere less strongly thus allowing for easy removal of the dressing without causing damage to the wound. The TR films/membranes that have been examined for TR wound dressings are derived from synthetic polymers. Synthetic polymers can have environmental and health concerns when it comes to medical applications. An alternative to using TR synthetic polymers is TR biopolymers which have the advantages of low-cost and biocompatibility. TR hydroxybutylated starch nanoparticles (HBSNPs) have been developed in the Taylor group. The objective of this work is to develop TR hydroxybutyl starch-based films with mechanical properties that are favorable for wound dressing applications. Films prepared from HBSNPs and using glycerol (GY) as plasticizer lacked stability in that they tended to become brittle even when stored in an environment with controlled humidity. Different approaches to improving their stability were examined. Sorbitol or mixtures of sorbitol and GY were examined as plasticizers but the resulting films still readily cracked and were opaque. Blending the HBSNPs with different amounts of poly (vinyl alcohol) (PVA) and GY generally did not produce stable films unless the amount of GY and PVA was very high (40 wt.% compared to the SNPs). The mechanical properties of the more stable HBSNP/PVA/GY films were determined by dynamic mechanical thermal analysis (DMTA) via tensile testings. Under 50 % RH, films with higher PVA had greater tensile strength and could be extended longer. No thermal transitions of these films or of the HBSNPs themselves were detected by differential scanning calorimetry (DSC). mPEG-grafted HBSNPs were developed in order to prepare a stable and thermoresponsive film. However, this approach was ultimately abandoned as the mPEG-grafted HBSNPs were difficult to purify and the starting material was expensive. Hydroxybutylated corn starch (HBCS) films reinforced with unmodified SNPs were prepared. Incorporation of the SNPs enhanced the physical properties of the HBCS films. Attempts to determine their thermoresponsivity by measuring their water contact angles were unsuccessful as the films were not stable to water. It was concluded that crosslinking of the HBCS films would be necessary to provide the needed water stability for contact angle measurements. Gels were obtained when using hexamethylene diisocyanate (HMDI) to crosslink the HBSNPs. The gels appeared to be thermoresponsive as determined by DSC; however, the results were difficult to reproduce possibly due to different crosslink densities within the gels. HBCS films crosslinked with glyoxal (GX) or oxidized sucrose (OS) were also prepared. Although the GX and OS crosslinks appeared to increase the stability of the HBCS films in water, they were still not highly stable.