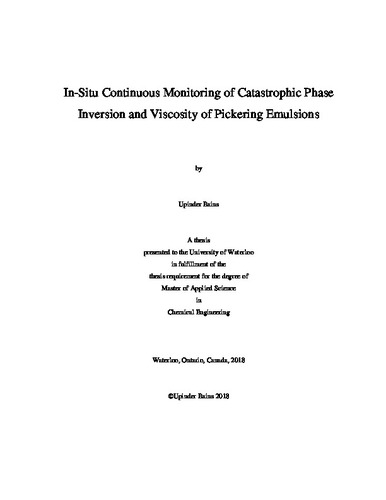 Emulsions are used in the various field such as petroleum, pharmaceuticals, foods, cosmetics, paints, etc. Emulsions stabilized with solid nanoparticles are called Pickering emulsions. More recently, a growing awareness of using environment friendly products has led to more and more researchers to develop and modify natural materials. Starch nanoparticle might be a suitable candidate because they are environmentally friendly, safe and non-toxic. Also, from a practical point of view, starch nanoparticles are low cost, and rheological properties of their emulsions can easily be altered with the help of additives. Because of the unstable nature of these emulsions, continuous agitation is needed to keep the emulsion from separating. This makes the viscosity measurements a challenge, however this task was made possible at low shear rates under some controlled parameters. In this study, an in-situ viscosity measurement method is used to investigate the viscous behaviour of O/W and W/O emulsions at a different volume fraction of the dispersed phase. For this purpose, rotational viscometer installed in a tank was used along with a high shear mixer. In this work, two sets of emulsions were formulated with starch nanoparticles to study their rheological behaviour. Also, Surfactant-stabilized O/W type emulsions were formulated with commercially known Triton X-100 non-ionic surfactant and compared with solid nanoparticles emulsions for rheology and stability. The emulsions viscosities and shear rate were measured at different concentrations of the dispersed phase and spindle rotation speeds. Experimental results showed that, at low concentration of dispersed phase, emulsions exhibited Newtonian behaviour and at high concentrations of the dispersed phase, emulsions displayed non-Newtonian shear-thinning behaviour in that viscosity was dependent on the shear rate. This nature of the emulsions was confirmed as the viscosity measurements changed with spindle rotation speeds. Starch nanoparticles increased the viscosity of the emulsions and played a critical role in stabilizing emulsions by adsorbing at the oil-water interface. For water-in-oil emulsions, Pickering emulsions displayed phase inversion which was related to particle concentration.