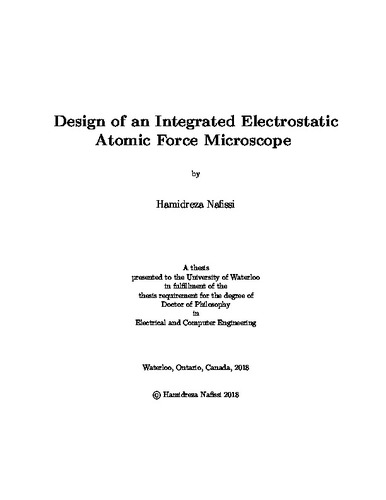 The need for investigation and characterization of physical, chemical and structural properties of material surfaces at the micro and nano scales led to the invention of Atomic Force Microscopy (AFM) in 1986 as a successor to the well-known Scanning Tunneling Microscopy (STM) to overcome the main shortcoming of STM, which worked only on conducting or semiconducting materials. In fact, the idea of AFM is predicated on the measurement of inter-atomic interaction forces between the molecules of a sharp stylus at the end of a silicon probe and the molecules of a specimen, when the tip comes to close proximity (less than $100$nm) of the sample. It detects the height of the probe hovering above the specimen surface by measuring the tip deflection, or the amplitude and frequency of its vibration. In each case (mode), the interaction forces between the sharp tip and the specimen govern the measured parameter which is detected optically by a laser beam reflected of the probe back side. A piezoelectric actuator drives the probe vibrations and Z-axis motions. Optical detection and piezoelectric actuation contribute significantly to the price and complexity of traditional AFM systems. In this research effort, we use electrostatic actuation and capacitive motion detection of off-shelf AFM probes via electrodes printed on a Printed Circuit Board (PCB), thereby eliminating the optical and piezoelectric components of traditional AFMs, drastically reducing its cost, size and complexity as well as enabling new AFM operating modes. Two configurations for the probe-electrode system were modeled, simulated and demonstrated experimentally. The actuation voltage contains DC and AC components while the actuation frequency is set close to the probe natural frequency. Model and experimental results show that the DC component controls the operating point (static gap between the electrode and the probe) and the AC component controls the sensitivity of the AFM. The detector output current is first amplified using a low-noise transimpedance amplifier. Next, a lock-in amplifier measures the magnitude and phase of the current at the second harmonic of the actuation frequency which is directly related to the tip-sample separation. This detection method overcomes the effect of large parasitic capacitance. It enables us to sketch two-dimensional maps of the current's magnitude or phase representing the specimen's topography. To improve sensitivity, the static distance between the probe\textquoteright s tip and the specimen was set to operate the AFM in intermittent (tapping) mode. A nano-stage was developed for this purpose. It allows us to raster scan the specimen surface. In future work, automatic closed-loop feedback control should be deployed to manage the height of the AFM tip over the specimen. A resonant drive and detection scheme should also be used to miniaturize the footprint of the AFM system to a few centimeters.