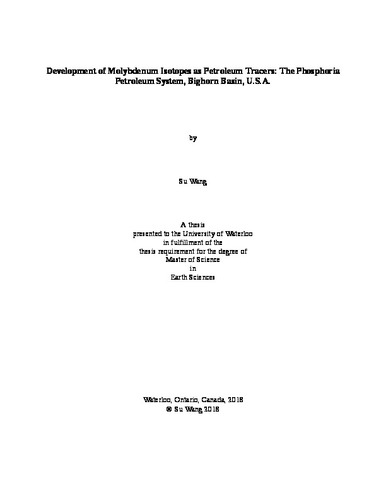 The application of Mo isotope compositions in petroleum systems is a new field of research. In this study, elemental concentrations and Mo isotope compositions were measured on crude oils, asphaltenes separated from the crude oils, and black shale source rocks (Meade Peak Member and Retort Member of the Permian Phosphoria Formation) from the Phosphoria petroleum system, U.S.A. An improved analytical methodology was developed for precise and accurate measurement of the Mo isotope composition of oil and asphaltene samples. Based on the concentrations of Mo, V, and Ni, the Meade Peak Member and Retort Member shales were deposited in both euxinic and non-euxinic environments. The Mo/TOC and Mo/U ratios of the euxinic shales suggests that the Meade Peak Member was deposited in a weakly to moderately restricted basin whereas the Retort Member was deposited at a time of greater basin restriction. Crude oils have Mo concentrations of 0.005-0.392 ppm, whereas Mo concentrations in the black shale source rocks reach hundreds of ppm. Hence, the amount of Mo transferred from kerogen in the black shales to the generated oil was low. Asphaltene Mo concentrations are 0.973-3.16 ppm, which are higher than the concentrations of these metals in the bulk crude oils. Hence, asphaltene is a major host of Mo in the Phosphoria crude oils. However, there is no strong correlation between the crude oil and asphaltene concentrations for each metal, suggesting other important hosts for these metals in the maltene fraction of the Phosphoria oils. The Mo isotope compositions (δ98/95Mo relative to NIST SRM 3134 = 0.25‰) and Mo concentrations in the Phosphoria crude oils, asphaltenes, and source rocks were measured. Asphaltene fractions (0.78-1.44‰) have similar or slightly lower δ98Mo compared with their bulk crude oils (0.87-1.53‰). Hence, there may be other fractions of the oil that have a higher δ98Mo than the bulk oil and asphaltene. The δ98Mo in crude oils minimally altered by reservoir processes (1.05-1.31‰) are lower than those of the most Mo- and TOC-rich black shales (1.05-1.98‰), implying Mo isotope fractionation during oil generation and/or migration. This observation suggests Mo isotopes are not useful as an oil-source rock correlation tool. The effect of reservoir processes on the Mo isotope compositions of crude oils in the Phosphoria petroleum system was also evaluated through comparison of altered versus non-altered oils. Crude oils affected by biodegradation and water washing (0.92-1.53‰) do not have significantly different δ98Mo compared to unaltered crude oils (1.05-1.31‰). Crude oils affected by thermochemical sulfate reduction (TSR) have generally lower δ98Mo (0.53-1.23‰) than those in unaltered crude oils. An inverse correlation is observed between the Mo and S isotope composition of the crude oils. The lower Mo isotope composition and higher S isotope composition of TSR-altered oils may have been caused by the introduction of external fluids containing isotopically light Mo and isotopically heavy S into the oil reservoir. The global ocean redox conditions at the time of Phosphoria Formation deposition can be inferred from the δ98Mo of the euxinic shales. Given that any expression of Mo isotope fractionation between the water column and euxinic sediments results in preferential removal of lighter Mo isotopes to the sediments, the highest δ98Mo values of 1.77‰ and 1.98‰ from the euxinic Meade Peak Member and Retort Member, respectively, represent minimum δ98Mo values for coeval global seawater. These values are consistent with recent Mo and U isotope studies that suggest an extensively oxygenated global ocean in the ~ 18 Myr before the largest Phanerozoic mass extinction event in the latest Permian.