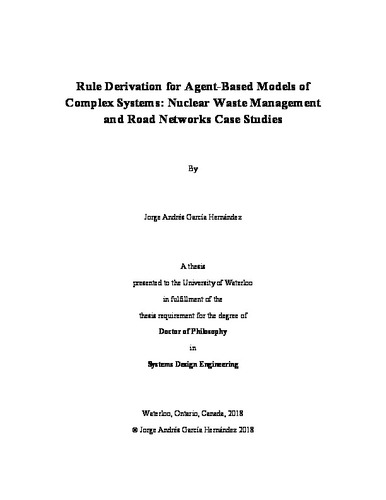 This thesis explores the relation between equation-based models (EBMs) and agent-based models (ABMs), in particular, the derivation of agent rules from equations such that agent collective behavior produces results that match or are close to those from EBMs. This allows studying phenomena using both approaches and obtaining an understanding of the aggregate behavior as well as the individual mechanisms that produce them. The use of ABMs allows the inclusion of more realistic features that would not be possible (or would be difficult to include) using EBMs. The first part of the thesis studies the derivation of molecule displacement probabilities from the diffusion equation using cellular automata. The derivation is extended to include reaction and advection terms. This procedure is later applied to estimate lifetimes of nuclear waste containers for various scenarios of interest and the inclusion of uncertainty. The second part is concerned with the derivation of a Bayesian state algorithm that consolidates collective real-time information about the state of a given system and outputs a probability density function of state domain, from which the most probable state can be computed at any given time. This estimation is provided to agents so that they can choose the best option for them. The algorithm includes a diffusion or diffusion-like term to account for the deterioration of information as time goes on. This algorithm is applied to a couple of road networks where drivers, prior to selecting a route, have access to current information about the traffic and are able to decide which path to follow. Both problems are complex due to heterogeneous components, nonlinearities, and stochastic behavior; which make them difficult to describe using classical equation models such as the diffusion equation or optimization models. The use of ABMs allowed for the inclusion of such complex features in the study of their respective systems.