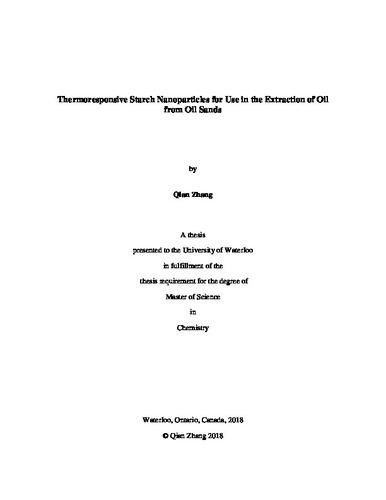 Oil sands represent the most abundant reserves of oil in the world. Nearly 97% of the oil reserves of Canada are found in the form of oil sands. Despite continued research, the extraction of oil from oil sands is costly and remains challenging. Thermoresponsive polymeric surfactants have been introduced as shuttling agents to improve the oil extraction efficiency, but they are costly and their synthesis cannot be easily scaled up. This project is to study the potential of thermoresponsive starch nanoparticles (tSNPs) as shuttling agents to improve the extraction of oil from oil sands. The use of starch, an abundant biopolymer obtained directly from plants, to prepare the tSNPs should be a cost-effective alternative to reduce the production cost of thermoresponsive polymeric shuttling agents. Two types of tSNPs were investigated. The first type was an SNP modified with poly(2-(2-methoxyethoxy)ethyl methacrylate) (tP(x)-SNP with x representing the weight percentage (wt%) of thermoresponsive polymer (tP)). A second type of tSNP was prepared by covalently attaching x mol% of styrene oxide and y mol% of butene oxide to an SNP to yield SO(x)-BO(y)-SNP. The efficiency of the tSNPs to shuttle the oil from oil sands to the surface of an aqueous tSNP dispersion was characterized in the presence of minute quantities of different co-solvents (toluene, octanol, and cumene). After numerous trials, the sample tP(15)-SNP with a degree of substitution around 0.02 was the best sample tried so far, with an oil extraction yield around 32 wt% when using a small amount of toluene. This yield was much higher than the yields of around 9 wt% obtained with pure water or aqueous dispersions of most other tSNPs employing a similar amount of organic co-solvent. Pyrene fluorescence was also applied to assess the relative hydrophobicity of different tSNPs in an attempt to relate the hydrophobicity of tSNPs to their efficiency for oil extraction. The results obtained by steady-state and time-resolved fluorescence indicate differences in the hydrophobicity of the tSNPs which can be used to improve the results from oil extraction yields.

Qian zhang (2018). Thermoresponsive Starch Nanoparticles for Use in the Extraction of Oil from Oil Sands. UWSpace. http://hdl.handle.net/10012/13317