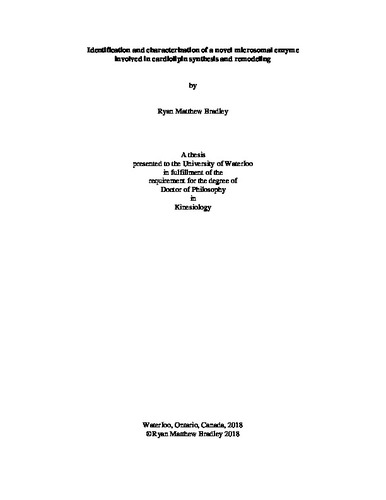 Cardiolipin (CL) is a specialized dimeric phospholipid predominantly found in the inner mitochondrial membrane in eukaryotes. Following de novo synthesis, the acyl chains of CL are remodeled in a manner that is tissue- and enzyme-specific, and can also be regulated by dietary intervention. This process is important for health. An incorrect CL fatty acyl profile is associated with serious disorders ranging from Barth Syndrome (BTHS), to Parkinson’s disease, heart, disease, and some cancers. To date, four highly specific enzymes have been implicated in this process. In this work, I report the biochemical and cellular characterization of a novel 25 kDa microsomal protein with a putative role in the synthesis and remodeling of CL. Of interest, this protein is highly abundant in cardiac and neural tissue, both of which contain the highest concentration of CL. In vitro evidence from crude lysates from HEK-293 overexpressing cells, and reticulocyte lysates, suggested that this enzyme functions as a phosphatidylcholine (PC): monolysocardiolipin (MLCL) transacylase in the synthesis of CL. The second objective of this thesis was to investigate the effects of the overexpression of this enzyme on cellular phospholipid content and composition in vivo, and related effects on mitochondrial physiology. As compared to controls, HEK-293 cells overexpressing this enzyme had an ~62% higher content of CL as compared to controls, but no significant increases in any other major phospholipid classes. Interestingly, mitochondrial respiration was impaired in these cells, although mitochondrial DNA content was not different, indicating that total mitochondria had not decreased. Overexpression of this enzyme in HEK-293 cells significantly up-regulated the mRNA expression of multiple genes involved in phospholipid biosynthesis, suggesting that it may also indirectly alter CL metabolism through cell signaling that could target transcriptional regulation. This enzyme has been previously demonstrated to synthesize small bioactive molecules that play roles in myriad biological pathways. However, treatment of cells with these the three most abundant species of these small bioactive molecules did not significantly increase CL content in HEK-293 cells. This suggested either that these bioactive molecules do not play a significant role in modulating the CL biosynthetic effects of this new enzyme, or that other species of the small bioactive molecules may be involved in mediating the induction of phospholipid metabolizing genes in HEK-293 cells overexpressing the novel enzyme. The final objective of this thesis was to assess the ability of one of the most abundant small bioactive molecules in modulating CL content and composition in a model of cellular CL deficiency. This work was performed in parallel with the studies in the second objective examining the ability of these small bioactive molecules to alter CL in HEK-293 cells, and therefore, the negative results of that work did not inform the choice of which species of bioactive molecule was tested. Cultured B-lymphocytes from individuals with Barth Syndrome (BTHS) were utilized as a study model. BTHS is a rare, X-linked genetic disorder that stems from mutations in Tafazzin, a CL fatty acid remodeling enzyme. Due to their inability to remodel the fatty acyl chains on CL following de novo synthesis, patients with BTHS have decreased CL content, which leads to a disease state, including heart failure, growth delay, and cyclic neutropenia. B-lymphocytes from BTHS patients treated with 1 M of an abundant species of these bioactive molecules exhibited a partial rescue of characteristic growth and CL deficiencies. This was surprising, given that: 1) the same species of bioactive molecule did not increase CL content in HEK-293 cells, and 2) that a final collaborative characterization study found that HEK-293 cells overexpressing the novel enzyme had significantly decreased content of this particular species of bioactive molecule. Of interest, that study also found that overexpression of this new enzyme may raise levels of a less abundant species of bioactive molecule, strongly suggesting that future studies should examine this species of bioactive molecule in the context of both CL synthesis and BTHS treatment. Thus, this novel enzyme is a microsomal PC:MLCL transacylase that increases CL in cells. study of this enzyme and its downstream bioactive molecules may provide novel therapeutic targets for disorders of CL metabolism.