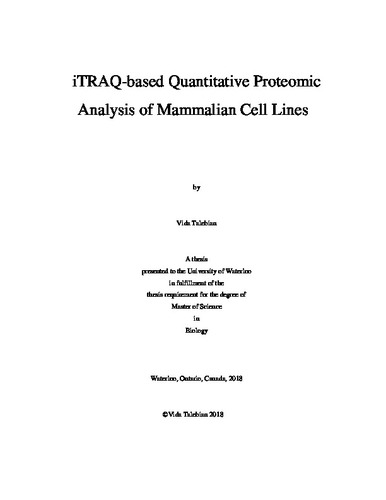 High-throughput proteomics approaches have been successfully employed in the inclusive and unbiased characterization of cellular proteome. In this thesis, we are aiming to comprehensively compare changes in proteome expression in mammalian cell lines under two different conditions. The first is an analysis of mAb producing CHO cells with a focus on comparing the productivity of inducible cells, and the second investigates human colorectal cancer cells with a focus on chemo-resistant cells. To this end, the quantitative proteomics technique iTRAQ was performed on the samples. The production of monoclonal antibodies as therapeutic medicines has gained increasing attention and applications in the last decades. Improving production levels is an important issue that can economically impact the industry. Chinese hamster ovary (CHO) cells are the most commonly used mammalian cell lines for the production of therapeutic mAbs and have been genetically modified for this purpose. Monitoring the effects of genetic modification systems on the cells is very important to maintain the quality and consistency of the cellular products. The possible changes or stresses forced on the cells after these modifications can be observed by analyzing the cells’ proteome and can enable the development of optimized expression systems. Also, the biological characteristics of high-producing CHO cells could be obtained by proteomic comparison of these cells. We quantified the expression levels of 1,616 unique proteins from an iTRAQ MS analysis and identified 81 proteins with p-values lower than 0.05 where the highest fold-change belong to the mAb sequence. Overall, proteins did not show any large changes based on the fold-change and it is likely that the induction system with cumate gene switch did not cause large metabolic changes or stress responses in the CHO cells. With these results we can suggest that the system has generated a stable cell line with a higher capacity for mAb production without inducing any major stress responses in the cells, and the cell line could have the potential for high mAb production using a stronger promoter system. The second topic of interest in this thesis is therapy resistance colorectal cancer, which is either caused by a selection or induction of drug resistance in a subset of colorectal cancer cells. Drug resistance is the first reason for treatment failure or metastasis, therefore understanding the biological features of resistant cells can be helpful. To this end, the cancer cell line, HT-29, and a SN-38 drug-resistant HT-29 cell line were explored by iTRAQ quantitative proteomic analysis. SN-38 is the active metabolite of the chemotherapy drug, irinotecan, a common mediation for treating colon cancer. The expression levels of 1,665 proteins were quantified and 21 proteins had significant changes with more than 1 log-fold-change. PAGE4 is the most up-regulated protein in the resistant HT-29 cells; it shows to have a role in cell viability and survival. Among the down-regulated proteins, cytokeratin (KRT20) had a significant low expression in resistant HT-29 cells that can show the change in cell migration because it is known for circulating CRC cells. Biosynthesis of antibiotics is identified as the most enriched KEGG pathway within the up-regulated genes; also, ribosome pathway is observed as the most enriched pathway among the down-regulated gene list. Overall, a large number of the differentially regulated genes were known in the stem cancer cells, EMT processes and metastasis. The main functions among the differentially regulated proteins is related to cell adhesion and migration, cell proliferation, and the ribosome.