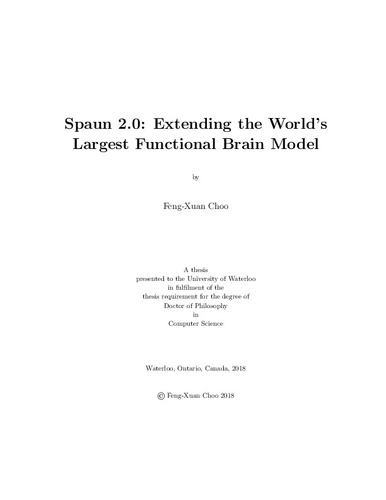 Building large-scale brain models is one method used by theoretical neuroscientists to understand the way the human brain functions. Researchers typically use either a bottom-up approach, which focuses on the detailed modelling of various biological properties of the brain and places less importance on reproducing functional behaviour, or a top-down approach, which generally aim to reproduce the behaviour observed in real cognitive agents, but typically sacrifices adherence to constraints imposed by the neuro-biology. The focus of this thesis is Spaun, a large-scale brain model constructed using a combination of the bottom-up and top-down approaches to brain modelling. Spaun is currently the world’s largest functional brain model, capable of performing eight distinct cognitive tasks ranging from digit recognition to inductive reasoning. The thesis is organized to discuss three aspects of the Spaun model. First, it describes the original Spaun model, and explores how a top-down approach, known as the Semantic Pointer Architecture (SPA), has been combined with a bottom-up approach, known as the Neural Engineering Framework (NEF), to integrate six existing cognitive models into a unified cognitive model that is Spaun. Next, the thesis identifies some of the concerns with the original Spaun model, and show the modifications made to the network to remedy these issues. It also characterizes how the Spaun model was re-organized and re-implemented (to include the aforementioned modifications) as the Spaun 2.0 model. As part of the discussion of the Spaun 2.0 model, task performance results are presented that compare the original Spaun model and the re-implemented Spaun 2.0 model, demonstrating that the modifications to the Spaun 2.0 model have improved its accuracy on the working memory task, and the two induction tasks. Finally, three extensions to Spaun 2.0 are presented. These extensions take advantage of the re-organized Spaun model, giving Spaun 2.0 new capabilities – a motor system capable of adapting to unknown force fields applied to its arm; a visual system capable of processing 256×256 full-colour images; and the ability to follow general instructions. The Spaun model and architecture presented in this thesis demonstrate that by using the SPA and the NEF, it is not only possible to construct functional large-scale brain models, but to do so in a manner that supports complex extensions to the model. The final Spaun 2.0 model consists of approximately 6.6 million neurons, can perform 12 cognitive tasks, and has been demonstrated to reproduce behavioural and neurological data observed in natural cognitive agents.