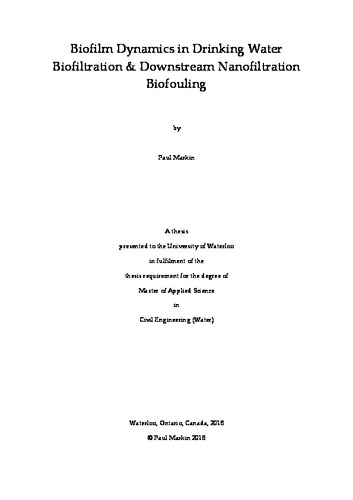 Natural organic matter (NOM) is a concern in many surface waters and must be removed by water treatment processes for cost-effective production of safe and aesthetically pleasing drinking water. Biological filtration is an appealing NOM removal method due to its simplicity and low maintenance requirements. Biofiltration is not traditionally used in water treatment headworks, however biofiltration without pretreatment (BFwp) breaks with common practice to function as both particle and biodegradable NOM removal as a 1st stage process. BFwp makes use of indigenous microbial populations embedded in a biofilm matrix to remove biodegradable organic matter (BOM) from raw source water. This configuration is a viable pretreatment strategy for both low and high pressure membrane filtration due to its ability to remove both particulate and soluble BOM, thereby mitigating biofouling on the membrane surface. Biofouling has been described as the “Achille’s heel” of membrane filtration (Flemming et al., 1997) due to its effects of increased operational cost and shortened membrane life-span. Therefore, a targeted effort is needed to understand how biofilter ecology affects performance both in the biofilter and downstream in membrane filtration units. Two parallel pilot scale BFwp units with dual-media were used in the current study for a seasonal characterisation of biofilter microbial dynamics and performance. Refurbishment of the biofilter pilot plant was performed by Dr. Ahmed Elhadidy and Brad Wilson, former students of the NSERC chair in water treatment. The current seasonal characterization spanned 14 months and made use of both new sample material as well as archived samples from Dr. Elhadidy. Biofilter media biomass was assessed using both adenosine tri-phosphate (ATP) and flow cytometric methods. Total protein, carbohydrate and free DNA of the media biofilm extracellular polymeric substances (EPS) were determined. Polymerase Chain Reaction – Denaturing Gradient Gel Electrophoresis (PCR-DGGE) was used to create microbial community fingerprint profiles of the biofilter feed and media. It was found that source water quality played a significant role in shaping BFwp microbial communities. Multivariate analysis of the PCR-DGGE fingerprints showed a media biofilm community shift occurred in response to high ammonia, high low molecular weight acids (LMW-acids) concentrations in the raw feed during January-February 2015. This low temperature, high ammonia and LMW-acids induced shift was accompanied by a rise in media biomass and EPS. Lower DOC and biopolymer removals were observed during the January-February 2015 community shift, however this was attributed largely to the effects which lower feed temperatures have on microbial biodegradation kinetics. No differences were found in community structures between media types, depths, or biofilter columns, however source water exhibited lower diversities and markedly different community structure than those of media biofilms. It was determined that media diversity and richness were high and did not exhibit seasonal fluctuations. As such these parameters could not be reliably related to biofilter DOC and biopolymer removal performance. In his investigation of biofiltration as a pretreatment for nanofiltration (NF), Dr. Elhadidy archived samples for molecular analysis that were used in the current study. PCR-DGGE was performed on extracted DNA from source water, media, and fouled membrane samples for bacteria, archaea, and fungi. Archaea were present in all samples, however their abundance was roughly 1000 fold less than bacteria, which made it difficult to assess their significance in the biofiltration and NF processes. Fungi were only screened for in one media and one source water sample during method development; both samples were positive. Archaeal community organisation was similar to that of bacteria during the autumn BF-NF experiment, however no community organisation was discernible during the winter experiment. Bacterial community structures from the autumn experiment showed that fouled NF membranes fed raw water clustered together with biofilter media, indicating feed water rather than substrate material influences bacterial community organisation. Comparatively, NF membranes fed with biofilter effluent produced a cluster of drastically dissimilar bacterial communities, which corresponded with improved flux and reduced biofoulant biomass. The microbial communities of biofiltration exhibited dynamic responses to feed water quality in both the seasonal and the nanofiltration studies. Biomass and EPS were highly correlated and their levels changed in response to community shifts, which in the seasonal and nanofiltration studies, were precipitated by changes in feed ammonia and BOM.