A Commons For Resistance 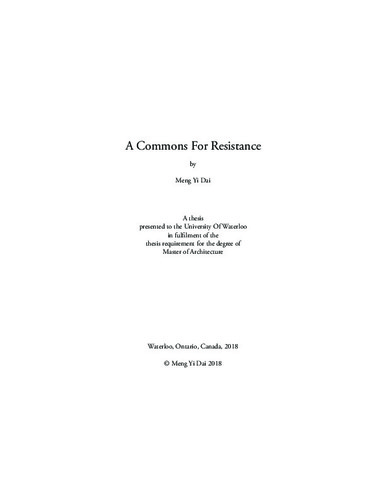 Oakland’s housing crisis is starkly visible. In recent years, the tech boom in Silicon Valley has drastically increased costs of living in the Bay Area. Many workers from San Francisco and the peninsula have relocated across the Bay to Oakland, in search of more affordable rent, spurring a wave of gentrification and displacement in the city. Since 2000, Oakland has lost 29% of its Black population. The Bay Area is gradually being re-segregated, as gentrification forces lower-income residents, often people of colour, to relocate to peripheral cities. A Commons for Resistance examines the current crisis through a dialectic of commons space and enclosures. Commons spaces are spaces a social group deems necessary to be shared by all its members, while enclosures are spaces controlled by an exclusive group, that produce benefits for that group to the exclusion of all others. The thesis posits that Oakland’s current crisis is made possible by- and perpetuates- a history of enclosure in the city’s urban landscape, which has created the inequality necessary for the current trend of displacement. Using a theoretical framework of commons and enclosures, the thesis also surveys current state, market and individual tactics addressing the crisis, revealing that most measures accept a default association between housing and private profit, and have limited effectiveness in adequately addressing the shortage of affordable housing. The thesis argues that, to be truly affordable, housing must be detached from motives of profit. The design response draws upon Oakland’s deep history of social justice activism, and the radical practices for living together that have emerged in its communities’ struggles to reclaim the commons. It advocates for a vision of housing embedded within the urban commons, kept perpetually affordable through a community land trust, a model of housing provision that is gaining clout in Oakland and in cities across the world facing gentrification pressures. An architecture of scaffolding is proposed for this model and applied in the design of three sites in Deep East Oakland. The scaffold refers a guiding framework for community involvement in the design and construction processes for these interventions. As well, the scaffold is an exploration of how architectural forms (surfaces, structures and landscapes) could contribute to the collective stewardship of space. It is not the place of this thesis, written from an outsider’s perspective, to offer a definitive set of steps to solve the housing crisis. Instead, by learning from the crisis in Oakland and the collective efforts to combat it, A Commons for Resistance adds a voice to the growing, global call to see housing as a collective responsibility, offering a set of suggestions and provocations that illustrate the potentials of dwelling in the commons.