Thirsty Land into Springs of Water: Negotiating a Place in Canada as Latter-day Saints, 1887-1947 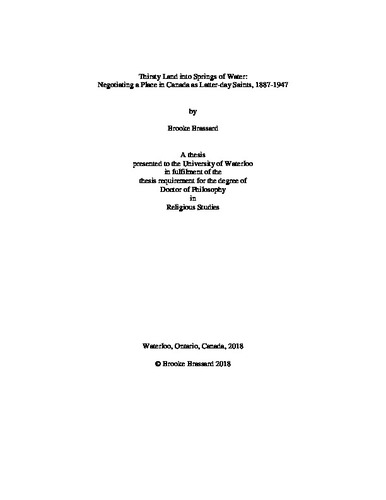 This dissertation examines how Latter-day Saints—originally an American tradition—expanded into an international religion beginning with their settlement on Canadian soil. The “Americanization thesis” promoted by scholars such as sociologist Armand L. Mauss, geographer Ethan R. Yorgason, and historian Thomas G. Alexander, who argued that Latter-day Saints assimilated into the American mainstream society by the mid-20th century, might lead one to expect to find a linear progression of “Canadianization” and a clear distinction between American and Canadian Latter-day Saints (LDS) by the 1950s. However, my investigation of Latter-day Saints in Alberta and their material culture, politics, economics, gendered roles, and marriage practices reveals that there was no singular element that differentiated American from Canadian Latter-day Saints. Understanding the subtle nature of the Mormon experience in southern Alberta (rather than America) required attention to Canadian society and Canadian narratives, and how Canadian LDS negotiated their identities in these Canadian contexts as a type of integration. The key to offering a critical analysis of negotiation, especially with a case study featuring Latter-day Saints, was to focus on the tension between integration and “peculiarity.” Mainstream society forced the newcomers to decide what they were willing to give up, maintain, or innovate in their own tradition as well as what they would adopt, reject, or ignore in their adopted society. Certain beliefs, traditions, and practices unique to Mormonism—characteristics that drew borders around themselves and maintained an identity of peculiarity—provided enough tension between the LDS and outsiders to keep them separate and different; however, this was generally in an inoffensive way because the Mormons successfully represented themselves as valuable settlers and labourers who posed little threat to the status quo in Canadian society.