How it Seams: Religious Dress, Multiculturalism, and Identity Performance in Canadian Society, 1910-2017 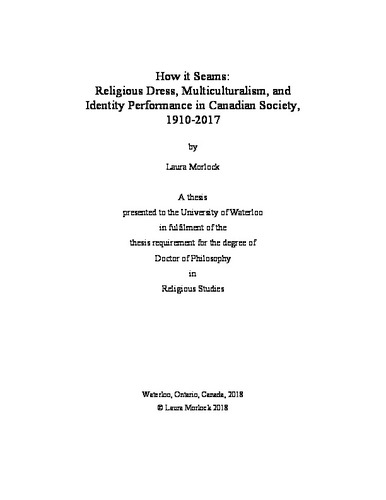 Canadians generally consider themselves forerunners of acceptance who deem diversity a core value, yet this identity coexists alongside fierce national debates over reasonable accommodation of minority religious practices in public spaces. In this context religious minorities use dress to communicate their needs and goals to the larger society, in the process expanding the parameters of human rights for all Canadians. This challenges the false narrative that Canada is a religiously neutral nation without its mainstream society’s own fervently held beliefs and practices, and of religious minorities as an inherently threatening force to these inviolable values. In order to understand how religious minorities engage dress in highly symbolic ways, this dissertation explores the ways everyday clothes become objects of sacred performance and sites of fierce public contestation in the process of identity creation, maintenance, and re-creation. This study uses three case studies of minorities and religious headcoverings in Canada over the course of a century to understand how dress functions as a means of communication within and between religious minority communities and the larger Canadian society. The first is the debate over Swiss Mennonite women’s headcoverings in Ontario during and immediately after World War I. The second is Baltej Singh Dhillon’s experiences as Canada’s first turban-wearing Sikh RCMP officer in 1989-90. The third is Zunera Ishaq’s Supreme Court case to wear her Muslim niqab during a citizenship ceremony and its effects on the federal election of 2015. These case studies provide examples of potential outcomes for these groups. In the first, the group achieves its ultimate goal but the larger society largely misses its message. In the second, Dhillon achieves his goal while successfully communicating his message to the government. In the third, Ishaq achieves her goal, but the larger society does not fully understand her message and the matter remains hotly debated. This dissertation considers the discursive interactions of clothes, colonialism, human rights, and religion, bringing together a diverse collection of theories and methods from several disciplines, demonstrating that those who “cling” to these parochial ways are far from incompatible with Canadian ideals.