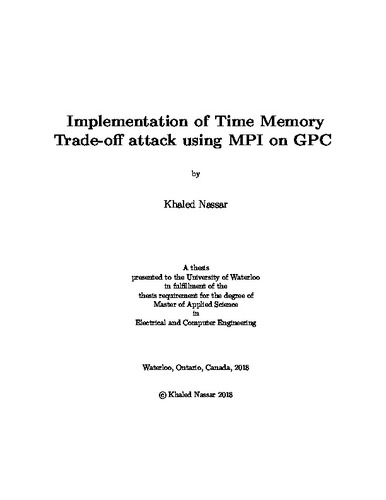 Time memory trade-off (TMTO) is a computationally intensive cryptographic attack originally introduced by Hellman in 1980. Since then many different improvements and implementations were researched and developed. In this thesis, we propose a frame work to implement TMTO with parallel computing using message passing interface (MPI) which is generic to serve a general cryptographic algorithm with flexibility. We have presented the framework development, design rationale, behavior testing, and proposal for collision handling. For the design rationale, we identified all the components, and features needed to build or expand the framework, and we identified the differences between it and original methodology proposed by Hellman. We explained the rationale behind choosing specific features for our implementation and for adding verification features like XOR cipher. We tested the behavior of the framework using mostly Simeck and partially Speck ciphers. We show that the main issue affecting the effectiveness of the generic implementation is collisions. We concluded that problem is almost completely parallel and coarse grained once we ignore the requirement for uniformly distributed random generation of the starting points. Throughout the program design and job result analysis, it became apparent that collision will be the main challenge so we proposed a fine grained collision detection and avoidance algorithm using parallel computing that should eliminate this problem and increase the coverage of the framework. The proposed algorithm relies on three layers of processes. The difference from the current approach is the middle layer that will be responsible for detecting and preventing collisions using doubly linked list structures. This will also be helpful in detecting cipher biases since it monitors the calculated block over the whole search space.