Are We There Yet? A Study of Public Space in Midtown Kitchener-Waterloo 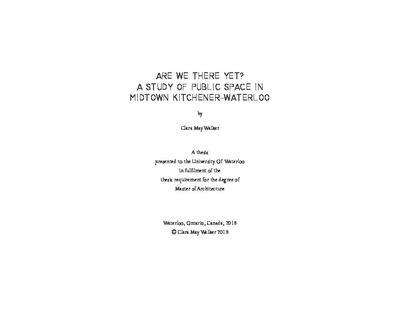 With the introduction of the Light Rail Transit (LRT) route, Midtown Kitchener-Waterloo is now easily accessible from other areas in the Region via several transit options without the need to rely on personal vehicles. The LRT connects public transit to pedestrian and bicycling infrastructure, and, more importantly, acts as a catalyst for mixed-use, residential, and commercial development along its route. These are drastic changes in both how people move from place to place, and where those places are within the Region. The public spaces of Midtown Kitchener-Waterloo will need to evolve in response to the changes prompted by the LRT development. The anticipated increase in population residing in this corridor will require additional amenities, and the streetscapes will need to address the augmented flows of people, all while enhancing without compromising the existing character. Through analysing the shifting priorities of emerging stakeholders, this thesis will explore how the public spaces of Midtown will reform during this period of change, and supplement ongoing government initiatives.