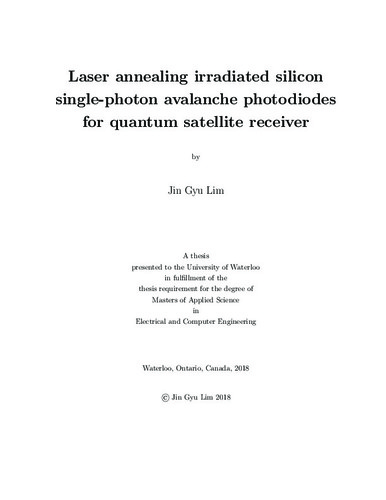 Single-photon avalanche photodiodes (SPADs) are a practical option for space-based quantum communications requiring single-photon detection. However, radiation damage to SPADs significantly increases their dark count rates and thus reduces their useful lifetimes in orbit. For Space-QUEST experiment, I analyzed the feasibility of using silicon SPADs inside the International Space Station for a 1-year mission. Adding a 1-year contingency margin and taking sample variations into account, Excelitas SLiK SPADs need to be cooled down to −45 ◦C and Excelitas C309021SH −65 ◦C to guarantee the dark count rate below 2000 Hz. In the first round of laser annealing tests, we show that high-power laser annealing of irradiated SPADs of three different models (Excelitas C30902SH, Excelitas SLiK, and Laser Components SAP500S2) heals the radiation damage and several SPADs are restored to typical pre-radiation dark count rates. Of nine samples we test, six SPADs were thermally annealed in a previous experiment as another solution to mitigate the radiation damage. Laser annealing reduces the dark count rates further in all samples with the maximum dark count rate reduction factor varying between 5.3 and 758, depending on the sample and the radiation dose, when operating at −80◦C. This indicates that laser annealing is a more effective method than thermal annealing. The illumination power to reach these reduction factors ranges between 0.8−1.6 W. Other photon detection characteristics, such as photon detection efficiency, timing jitter, and afterpulsing probability, fluctuate but they are not sufficient enough to impact the overall performance of quantum communications. These results herald a promising method to extend the lifetime of a quantum satellite equipped with SPADs. We then perform the second round of laser annealing tests. This starts off with radiation simulation to determine radiation dosages of different lifetimes in space for radiation test performed on Laser Components SAP300s. After proton irradiation, the samples from each damage group are laser-annealed using the same method in the first round of laser annealing tests (60s continuous exposure) and the results show that they all recover the dark count rate close to the pre-radiation values at 22◦C. The optical power to achieve such reduction is between 800−1000mW. In addition, we explored new laser annealing methods in order to learn about the causes of the laser annealing effect. We show that the 180s continuous exposure and 50% duty cycle method for 60s exposure can also return the dark count rate to pre-radiation levels when the average illumination power is between 800−1000mW. These results imply that the thermal effect is the main contributor of laser annealing. However, we also show that forward-bias current annealing on one sample and its dark count rate drops at a much faster rate per power deposition than other laser annealing methods. As a result, more tests need to be done to investigate the causes of the laser annealing effect further. Furthermore, we find that the improvement from laser annealing is permanent.