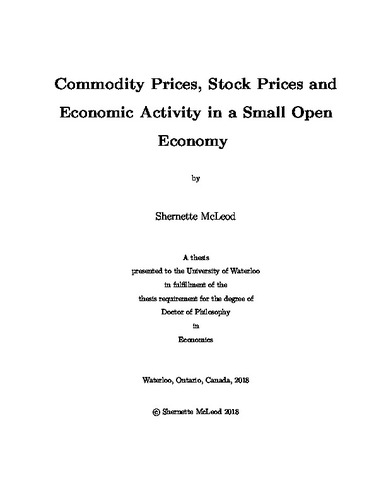 This thesis is comprised of three papers which jointly examine the role of commodity prices as well as other asset prices in influencing the evolution of economic activity in a small-open economy (SOE). Using Canada as the quintessential small-open economy, each chapter adopts a particular approach to investigating this dynamic relationship. It is hoped that the contribution made in this thesis to understanding the relationship will aid policy-makers as they attempt to address the associated policy questions which are often fraught with difficulties and uncertainty. In chapter 1 the use of a recursively identified Vector Auto-Regression (VAR) is employed to study the impact of commodity price shocks on Canada's macro-economy. While similar analysis has been carried out before, this has tended to focus solely on the impact of oil prices. Additionally, the analysis has tended to focus on aggregate output, while neglecting the specific sectoral impact. Given that each sectors' exposure to commodity price movements will be different, one would also expect varying sectoral responses to these shocks. Chapter 1 attempts to focus on this and thus offers a level of insight into the operation of the Canadian macro-economy which has not been extensively addressed in the literature. The results suggest that indeed there is divergent sectoral responses to commodity price shocks, using a broad measure of commodity prices. The commodity producing sectors of the economy respond favourably to an unexpected rise in commodity prices, whilst the manufacturing sector is negatively impacted by such movements. We also found evidence that policy-makers may attempt to contain any inflationary pressures emanating from rising commodity prices by raising interest rates. Chapter 2 delves even further into the dynamics of this relationship by employing a Dynamic Stochastic General Equilibrium (DSGE) model. In this chapter we extend the analysis undertaken in chapter 1, where we are again attempting to ascertain the sectoral responses to a commodity price shock. The use of this modelling framework however allows us to analyse that relationship in a manner which is internally consistent and also in-line with our beliefs about the behaviour of economic agents. Additionally, the DSGE model allows us to conduct counter-factual policy experiments which were not possible using the VAR framework. The results of the model are generally in-line with those found in chapter 1, as the commodity price shock has differing impacts on the various sectors of the economy. The results suggest that just examining the aggregate effects of commodity price shocks could overshadow important sectoral differences which are subsumed in these aggregate figures. Additionally, the counter factual policy exercises indicate that actions taken by the Central Bank during the Global Financial Crisis positively impacted Canada's economic performance during the crisis and the period immediately after. In the final chapter, co-authored with Jean-Paul Lam, we seek to quantify the interdependence between stock prices and monetary policy using an underidentified Structural VAR (SVAR) for Canada and the United States. We find that employing a recursive identification leads to counterfactual responses for the stock market following a monetary policy shock. In the underidentified VAR, the stock market and monetary policy are allowed to simultaneously react to each other's shock through a combination of short-run, long-run and sign restrictions. Unlike many studies in this literature, we impose a minimal number of restrictions on the short-run and long-run matrix, allowing the data to uncover the relationship between the variables in the SVAR. We find that an increase of 25 basis points (b.p.) in the policy rate of the central bank leads to a fall of about 1.75% in stock prices in Canada and to a fall of about 1.25% in stock prices in the U.S. This effect of monetary policy on stock prices is larger in Canada compared to the U.S. mainly because sectors that are interest rate sensitive, such as financials and energy account for a much larger share of the stock index in Canada compared to the U.S. Following a stock market shock, the short-term interest, industrial production, inflation and commodity prices rise both in Canada and in the U.S. A 1% increase in the stock market leads to an increase of about 27 b.p. in the overnight rate in Canada while it leads to an increase of about 10 b.p. in the Federal funds rate.