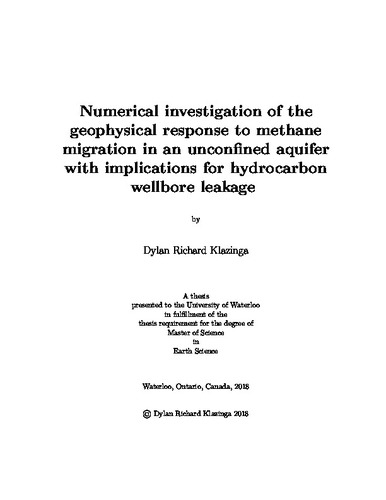 Methane gas leakage from oil and gas development can impact freshwater aquifers. Accurate depictions of gas migration in the subsurface will depend on knowledge of physical parameters and flow system conditions. Geophysical methods have the capacity to detect and track transient changes in gas-phase saturation; suitable methods can be deployed at surface or within boreholes depending on the required depth of investigation. While the application of geophysical methods to monitor immiscible-phase fluids in the subsurface has been extensively documented, knowledge of governing hydraulic parameters, flow system conditions, and impacts on the geophysical responses used to elucidate hydrogeologic processes remains underdeveloped. A series of numerical multi-phase flow models simulating a 72 day controlled methane leakage experiment in an unconfined aquifer at Canadian Forces Base (CFB) Borden (Cahill et al., 2017) were conducted to evaluate the utility of electrical resistivity tomography (ERT) and ground-penetrating radar (GPR) to monitor and characterize the transient evolution of the gas-phase plume, and to better understand the impacts of varying hydraulic properties and flow system conditions on the geophysical signatures used to interpret gas phase behaviour (Steelman et al., 2017). This study investigates the role of multi-phase parameters (e.g., relative permeability, air-entry pressure, and injection rate history), flow system conditions (e.g., heterogeneity, anisotropy, and groundwater velocity), and geometrical properties (e.g., con fining layer thickness and continuity) on the flow of gas-phase methane emanating from a variable rate source, and the subsequent impacts of gas migration on the geophysical responses observed from surface geophysical surveys. Aquifer parameters were based on physical measurements of soil core from the injection site and literature values for the Borden sand, while the injected methane was considered to be non-reactive over the simulation period. In a homogeneous, weakly anisotropic aquifer gas migrated vertically by buoyancy and efficiently vented to the vadose zone. As vertical migration was restricted through the addition of anisotropy, lower-permeable features, and increased horizontal groundwater velocity, an increase in the horizontal component of the gas migration was observed, leading to a broader gas-phase plume, establishment of variably distributed vertical preferential flow paths, and greater gas retention in the aquifer. The inclusion of a thin layer with moderately lower permeability with an increased entry pressure representing a thin sand lens within the aquifer, caused gas to accumulate within pools below the layer, extending farther down-gradient than would be expected from advection alone. These results showed that in all scenarios gas-phase methane mostly migrated vertically under buoyancy conditions until some barrier to vertical migration was reached, at which point gas migrated laterally until pressures exceeded the entry pressure. Corresponding ERT and GPR models were run using the multi-phase flow model pore water saturation distributions to parametrize electrical resistivity and dielectric permittivity across the model domains using Archie's Law and the Complex Refractive Index Model, respectively. These models showed that ERT was effective at imaging the central plume (i.e., primary bulb around the shallow injector), but was less effective at detecting thinner lateral migration pathways (i.e., preferential flow paths migrating beyond the primary bulb). Conversely, GPR was able to detect thin gas pools emanating from the primary gas bulb and small-scale vertical preferential pathways arising from capillary boundaries; gradational boundaries, however, proved to be a more difficult target using GPR (e.g., outer boundary of the gas plume and gas trapped within lower-permeable layers with no increase in capillary pressure). The results of this study demonstrate that ERT and GPR can be very useful tools for longer-term monitoring of stray gas leakage in freshwater aquifers, particularly when there is a strong lateral migration component to flow and access to the contaminated aquifer zone is feasible. However, additional work remains to understand the impacts of methane oxidation (aerobic and anaerobic) on the geophysical signatures associated with gas and aqueous-phase methane migration and the role of external processes such as recharge, barometric pressure, and temperature on gas plume behaviour.