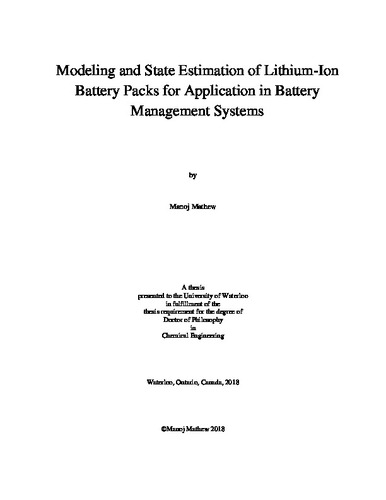 As lithium-ion (Li-Ion) battery packs grow in popularity, so do the concerns of its safety, reliability, and cost. An efficient and robust battery management system (BMS) can help ease these concerns. By measuring the voltage, temperature, and current for each cell, the BMS can balance the battery pack, and ensure it is operating within the safety limits. In addition, these measurements can be used to estimate the remaining charge in the battery (state-of-charge (SOC)) and determine the health of the battery (state-of-health (SOH)). Accurate estimation of these battery and system variables can help improve the safety and reliability of the energy storage system (ESS). This research aims to develop high-fidelity battery models and robust SOC and SOH algorithms that have low computational cost and require minimal training data. More specifically, this work will focus on SOC and SOH estimation at the pack-level, as well as modeling and simulation of a battery pack. An accurate and computationally efficient Li-Ion battery model can be highly beneficial when developing SOC and SOH algorithms on the BMS. These models allow for software-in-the-loop (SIL) and hardware-in-the-loop (HIL) testing, where the battery pack is simulated in software. However, development of these battery models can be time-consuming, especially when trying to model the effect of temperature and SOC on the equivalent circuit model (ECM) parameters. Estimation of this relationship is often accomplished by carrying out a large number of experiments, which can be too costly for many BMS manufacturers. Therefore, the first contribution of this research is to develop a comprehensive battery model, where the ECM parameter surface is generated using a set of carefully designed experiments. This technique is compared with existing approaches from literature, and it is shown that by using the proposed method, the same degree of accuracy can be obtained while requiring significantly less experimental runs. This can be advantageous for BMS manufacturers that require a high-fidelity model but cannot afford to carry out a large number of experiments. Once a comprehensive model has been developed for SIL and HIL testing, research was carried out in advancing SOH and SOC algorithms. With respect to SOH, research was conducted in developing a steady and reliable SOH metric that can be determined at the cell level and is stable at different battery operating conditions. To meet these requirements, a moving window direct resistance estimation (DRE) algorithm is utilized, where the resistance is estimated only when the battery experiences rapid current transients. The DRE approach is then compared with more advanced resistance estimation techniques such as extended Kalman filter (EKF) and recursive least squares (RLS). It is shown that by using the proposed algorithm, the same degree of accuracy can be achieved as the more advanced methods. The DRE algorithm does, however, have a much lower computational complexity and therefore, can be implemented on a battery pack composed of hundreds of cells. Research has also been conducted in converting these raw resistance values into a stable SOH metric. First, an outlier removal technique is proposed for removing any outliers in the resistance estimates; specifically, outliers that are an artifact of the sampling rate. The technique involves using an adaptive control chart, where the bounds on the control chart change as the internal resistance of the battery varies during operation. An exponentially weighted moving average (EWMA) is then applied to filter out the noise present in the raw estimates. Finally, the resistance values are filtered once more based on temperature and battery SOC. This additional filtering ensures that the SOH value is independent of the battery operating conditions. The proposed SOH framework was validated over a 27-day period for a lithium iron phosphate (LFP) battery. The results show an accurate estimation of battery resistance over time with a mean error of 1.1% as well as a stable SOH metric. The findings are significant for BMS developers who have limited computational resources but still require a robust and reliable SOH algorithm. Concerning SOC, most publications in literature examine SOC estimation at the cell level. Determining the SOC for a battery pack can be challenging, especially an estimate that behaves logically to the battery user. This work proposes a three-level approach, where the final output from the algorithm is a well-behaved pack SOC estimate. The first level utilizes an EKF for estimating SOC while an RLS approach is used to adapt the model parameters. To reduce computational time, both algorithms will be executed on two specific cells: the first cell to charge to full and the first cell to discharge to empty. The second level consists of using the SOC estimates from these two cells and estimating a pack SOC value. Finally, a novel adaptive coulomb counting approach is proposed to ensure the pack SOC estimate behaves logically. The accuracy of the algorithm is tested using a 40 Ah Li-Ion battery. The results show that the algorithm produces accurate and stable SOC estimates. Finally, this work extends the developed comprehensive battery model to examine the effect of replacing damaged cells in a battery pack with new ones. The cells within the battery pack vary stochastically, and the performance of the entire pack is evaluated under different conditions. The results show that by changing out cells in the battery pack, the SOH of the pack can be maintained indefinitely above a specific threshold value. In situations where the cells are checked for replacement at discrete intervals, referred to as maintenance event intervals, it is found that the length of the interval is dependent on the mean time to failure of the individual cells. The simulation framework, as well as the results from this paper, can be utilized to better optimize Li-ion battery pack design in electric vehicles (EVs) and make long-term deployment of EVs more economically feasible.