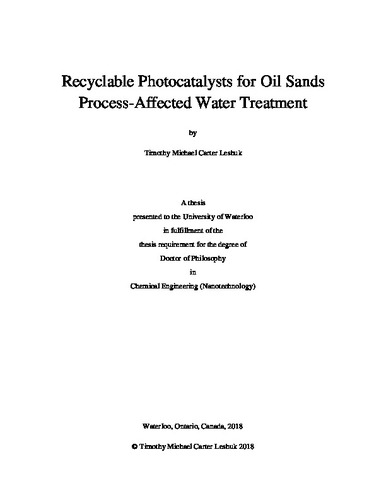 One of the largest environmental challenges faced by Canada is the cleanup and reclamation of land and water impacted by mining operations in the Athabasca oil sands. The persistence of toxicity associated with the soluble naphthenic organic compounds (NOCs) of oil sands process-affected water (OSPW) implies that a treatment solution may be necessary to enable safe return of this water to the environment, and the industry is currently exploring passive (i.e., no energy or chemical input) remediation solutions. Among the methods investigated for OSPW treatment, advanced oxidation processes (AOPs) have been shown to be particularly effective for degrading NOCs and reducing OSPW toxicity. However, AOPs are chemically and energy intensive, and are generally considered impractically expensive to meet the scale of treatment required. Solar photocatalysis is a powerful AOP with the potential for passive treatment, however the separation and recycling of nanoparticle photocatalysts remains a key barrier to implementation. This thesis focuses on evaluating photocatalytic treatment of NOCs in OSPW, and the development of composite materials to facilitate separation and recycling of nanoparticle photocatalysts. Solar photocatalysis over TiO2 was found to degrade OSPW naphthenic acids (NAs) through superoxide-dependent oxidative mineralization. The important water and process parameters affecting the rate of photocatalytic treatment were elucidated, and an empirical model was proposed to predict OSPW treatment kinetics in different tailings ponds. Magnetic flocculation was developed as a new paradigm for magnetic nanoparticle capture, and demonstrated to efficiently recycle colloidally dispersed TiO2 nanoparticles in a closed-loop process. Floating photocatalysts were also synthesized to adapt the photocatalytic process towards a passive deployment paradigm, by immobilizing TiO2 nanoparticles onto buoyant glass microspheres. Floating photocatalysts were demonstrated to preferentially treat OSPW base- and neutral-extractable organics and priority toxic naphthenic organic classes of concern. Firstly, photocatalysis with TiO2 was evaluated for the first time in raw OSPW under natural sunlight. One day of photocatalytic treatment under natural sunlight eradicated acid-extractable organics (AEO) from raw OSPW, and acute toxicity of the OSPW toward Vibrio fischeri was eliminated. Nearly complete mineralization of organic carbon was achieved within 1-7 day equivalents of sunlight exposure, and degradation was shown to proceed through a superoxide-mediated oxidation pathway. High resolution mass spectrometry (HRMS) analysis of oxidized intermediate compounds indicated preferential degradation of the heavier and more cyclic NAs (higher number of double bond equivalents), which are the most environmentally persistent fractions. The photocatalyst was shown to be recyclable for multiple uses, and thus solar photocatalysis was concluded to be a promising “green” AOP for OSPW treatment. Further studies focused on factors affecting the kinetics of photocatalytic AEO degradation in OSPW. The rate of photocatalytic treatment varied significantly in two different OSPW sources, which could not be accounted for by differences in AEO composition, as studied by HRMS. The effects of inorganic water constituents were investigated using factorial and response surface experiments, which revealed that hydroxyl (HO•) radical scavenging by iron (Fe3+) and bicarbonate (HCO3-) inhibited the NA degradation rate. The effects of NA concentration and temperature on the treatment kinetics were also evaluated in terms of Langmuir-Hinshelwood and Arrhenius models; pH and temperature were identified as weak factors, while dissolved oxygen (DO) was critical to the photo-oxidation reaction. Accounting for all of these variables, a general empirical kinetic expression was proposed, enabling prediction of photocatalytic treatment performance in diverse sources of OSPW. Considering the challenge of TiO2 nanoparticle separation from colloidal dispersions, magnetic flocculation was developed as a new approach to nanoparticle recovery. Flocculant polymers were coated onto magnetic nanoparticles (Fe3O4@SiO2) to prepare reusable magnetic flocculants (MFs). When added to colloidal nanoparticle dispersions, MFs aggregate with the suspended nanoparticles to form magnetically responsive flocs, which upon separation can be reversibly deflocculated for nanoparticle release, and reuse in a closed loop process. High separation efficiency was attained in a variety of nanoparticle suspensions, including Au, Ag, Pd, Pt, and TiO2, stabilized by different coatings and surface charge. The MFs were shown to be recyclable for photocatalytic treatment of naphthenic acids in oil sands process-affected water (OSPW) and selenium in flue gas desulfurization wastewater (FGDW). Magnetic flocculation thus represents a general platform and alternative paradigm for nanoparticle separation, with potential applications in water treatment and remediation of nanoparticle pollution. As an alternative passive catalyst recycling strategy, floating photocatalysts (FPCs) were prepared by immobilizing TiO2 on glass microbubbles, such that the composite particles float at the air-water interface for passive solar photocatalysis. The FPCs were demonstrated to outperform P25 TiO2 nanoparticles in degrading AEO in raw OSPW under natural sunlight and gentle mixing conditions. The FPCs were also found to be recyclable for multiple uses through simple flotation and skimming. Thus the concept of a potentially passive or semi-passive AOP for OSPW treatment was demonstrated for the first time. Finally, OSPW treatment using FPCs was evaluated under a petroleomics paradigm: chemical changes across acid-, base- and neutral-extractable organic fractions were tracked throughout the treatment with both positive and negative ion mode HRMS. Transformation of OS+ and NO+ classes of concern in the earliest stages of the treatment, along with preferential degradation of high carbon-numbered O2- acids, suggest that photocatalysis may detoxify OSPW with higher efficiency than previously thought, given that the majority of the toxicity of OSPW is currently understood to derive from a subset of such toxic classes, comprising only a minority of the total NOCs. Overall, this thesis advances the understanding of the photocatalytic treatment of OSPW, as well as separation processes for nanoparticle photocatalysts. Combining a sunlight-driven, chemical-oxidant-free catalytic oxidation process with a low-energy, membrane-free catalyst separation and recovery technique may represent a promising strategy to adapt advanced oxidation process (AOP) technology for the passive treatment of OSPW, or other remote mining-impacted waters.