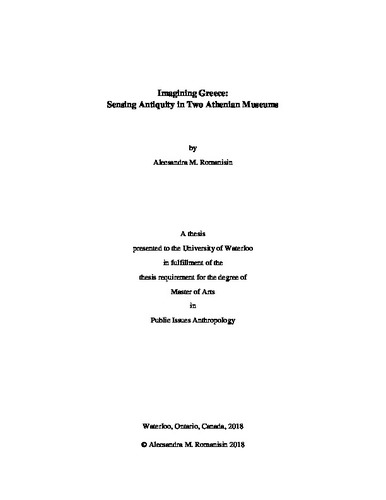 Physical and sensorial experiences of museums provide publics with a material ground to (re)imagine history and its relationship to contemporary society. Through these experiences, museums become venues of spatialized discourse that materialize and represent different imaginations of the past in accordance with their political and historical context. Nationalistic discourses of the 19th and early 20th centuries in Greece and Europe idealized antiquity as homogeneous and pristine (rather like white marble). There has, however, been a push in recent decades from artists, scholars, and curators to reimagine this representation of history via an open critique of the fetishized and romanticized images of antiquity. This thesis examines how the process of materialization and representation works in contemporary imaginations of Greek antiquity in two Athenian museum contexts: The Acropolis Museum’s permanent Parthenon exhibit, and the Benaki Museum’s temporary Liquid Antiquity installation. Distinct in their locations, orientations, and foci, these displays illustrate two particular products of the call to reimagine antiquity. The former employs modern display methods, a more fluid spatial organization, and more audiovisuals. Yet, it remains bound to the traditional representations of antiquity in the content and meaning of its display. The latter personifies a reimagination of antiquity and puts its critical expressions on display. The form and terms of this display, however, remain reliant on traditional representations of antiquity. By juxtaposing these two cases, I argue that imaginations of the past in museum contexts are multiple, but not boundless. Rather, they are produced and limited by the historical, spatial, and material context of their representation.