Effective Use of SSDs in Database Systems 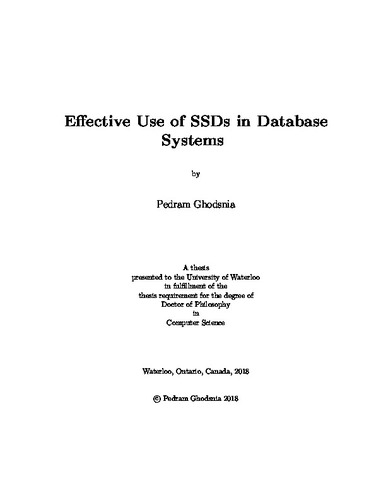 With the advent of solid state drives (SSDs), the storage industry has experienced a revolutionary improvement in I/O performance. Compared to traditional hard disk drives (HDDs), SSDs benefit from shorter I/O latency, better power efficiency, and cheaper random I/Os. Because of these superior properties, SSDs are gradually replacing HDDs. For decades, database management systems have been designed, architected, and optimized based on the performance characteristics of HDDs. In order to utilize the superior performance of SSDs, new methods should be developed, some database components should be redesigned, and architectural decisions should be revisited. In this thesis, novel methods are proposed to exploit the new capabilities of modern SSDs to improve the performance of database systems. The first is a new method for using SSDs as a fully persistent second level memory buffer pool. This method uses SSDs as a supplementary storage device to improve transactional throughput and to reduce the checkpoint and recovery times. A prototype of the proposed method is compared with its closest existing competitor. The second considers the impact of the parallel I/O capability of modern SSDs on the database query optimizer. It is shown that a query optimizer that is unaware of the parallel I/O capability of SSDs can make significantly sub-optimal decisions. In addition, a practical method for making the query optimizer parallel-I/O-aware is introduced and evaluated empirically. The third technique is an SSD-friendly external merge sort. This sorting technique has better performance than other common external sorting techniques. It also improves the SSD's lifespan by reducing the number of write operations required during sorting.