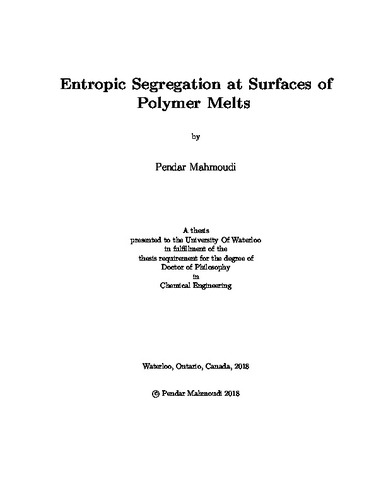 Throughout recent years, polymers have been one of the most widely used materials in industry due to their suitability to a vast variety of fields from construction to biomedical and technological utilities. Their extensive and broad range of applications, demands the ever increasing necessity for extensive insight into the behavior and properties of this group of materials. Whilst some aspects of this demand can be addressed through experiments, the inherent difficulties and restrictions of studying polymeric systems with greater degrees of complexity, have motivated researchers to discover alternative means of examining these cases of interest effectively. The advent of polymer theory as well as the development of appropriate computer simulation techniques have proven to be invaluable sources of new insight. With the ever increasing use of polymeric materials in industrial applications, such as highly efficient coatings and adhesives, an in-depth knowledge of their behavior close to surfaces is needed. Moreover, for the development of effective materials, an accurate understanding of their physical properties such as their surface tension is also required. In this light, our goal is to study the surface behavior of polymers melts, whether they be monodisperse or polydisperse. The study of the former system, which is a melt composed of chains of a single length, is more attractive theoretically as a basis for a comprehensive study of influential parameters. However, in reality, most polymeric materials are polydisperse, hence motivating the detailed assessment of both. Surfaces behave as reflecting boundaries for the most part but violations are seen to occur due to a number of parameters such as the finite width of surface profiles, discreteness of chains as well as excluded volume effects. These result in an excess of end monomers being observed at the surfaces of monodisperse melts and shorter chains segregating to the surfaces of polydisperse ones, from which the surface tension is seen to be affected as well. The source of these migrations could either be enthalpic, with a preference for ends to be closer to surfaces, but also purely entropic which is the case studied here. With the inherent difficulties of experimentally isolating these entropic phenomena, a more successful outcome is obtained through their theoretical study. Hence, for both of the aforementioned systems, we shall be performing mean-field calculations as well as Monte Carlo simulations, in addition to comparing them with universal predicted forms to test their accuracy.