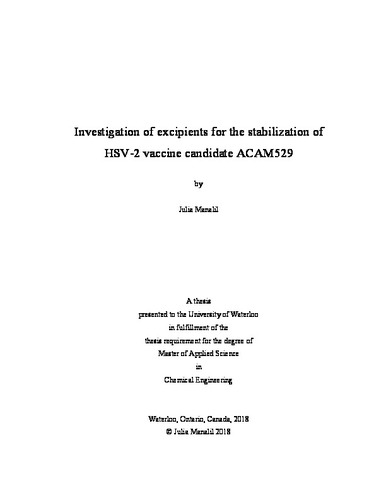 Herpes simplex virus type 2 (HSV-2) is a highly infectious pathogen that causes genital ulcerative disease and it affects millions of people worldwide. ACAM529 is a promising new live replication-deficient vaccine candidate against the virus. Vaccine stability during the upstream production processes is an issue so there is a great need for developing an effective stabilization buffer that will protect the vaccine during the process. The purpose of this work was to study the characteristics of ACAM529 and identify excipients that would protect the vaccine from inactivation in liquid solution short-term. To establish a baseline of ACAM529 stability for further improvements, three lots of purified ACAM529 with differing purification protocols were characterized: Lot A, Lot B and Lot C. Plaque assays were used to determine the titer of each lot, SDS-PAGE was used to analyze the albumin content, and transmission electron microscopy (TEM) was used to image the virus. Lot C was found to have the highest titer at 5.2 ± 0.6 x 10e7 PFU/ml and albumin concentration at approximately 8 g/L compared to Lot A (3.4 ± 0.6 x 10e6 PFU/ml and 0.5-1 g/L, respectively) and Lot B (2.1 ± 0.4 x 10e7 PFU/ml and <0.13 g/L, respectively). TEM imaging revealed a high prevalence of unenveloped compared to enveloped virus and some clumping of virus particles, however no differences could be identified between the lots. In addition, a time course assay was developed to study the stability of ACAM529 over 120h. Lot C was found to be more stable than Lot A and Lot B, especially at lower temperatures. Lot A and Lot B showed similar levels of stability at 2-4°C and 25°C. To screen for ACAM529 stabilizers in liquid solution, various defined and complex solutions used in cell culture for virus production were studied using a time course assay. The addition of 0.01%-10% FBS to the reference buffer resulted in improvements to Lot B stability at 27°C, with minimal titer loss after 120h occurring with 1% FBS. The addition of 0.05-5 g/L rHSA to the reference buffer for Lot B improved viral stability at 2-4°C in a concentration-independent manner. However, at 27°C, 0.5-5 g/L rHSA significantly reduced the stability, where increasing concentrations of rHSA lead to decreasingly stable virus. Low concentrations of rHSA (0.05 g/L) improved stability at 27°C. The addition of 10% conditioned OptiPro SFM resulted in a slight improvement to stability over a period of 120 hours at 27°C, however the same amount of fresh medium resulted in no change to stability. The addition of 0.1x-1x CLC supplements to the buffer resulted in dramatic decreases to ACAM529 stability at 27°C, especially in the first 24h. Lastly, Pluronic F68 (PF68) at concentrations below the critical micelle concentration (CMC), significantly improved viral titers after 120h, with maximal stability achieved at a concentration of 0.1% PF68. Lastly, other excipients that have been implicated in enhancing the stability of protein and lipid-based products were investigated for ACAM529 stabilization. An acidic buffer (pH 5) condition caused an improved initial infectivity of the virus when titered with the plaque assay, however it had a negative impact on long-term stability compared to buffers in the range of pH 6-7. The replacement of 10% (w/v) sucrose with 10-30% (w/v) trehalose in the reference buffer did not result in changes to viral stability at pH 6-7 at 27°C. Also, the addition of 0.01-0.1 M L-arginine (along with the resulting increase in buffer ionic strength with the addition of Cl- ions) and 0.1x-1x non-essential amino acid solution (NEAA) did not significantly affect the stability of ACAM529. This work showed that it was possible to improve the stability of ACAM529 in the current liquid buffer. The highest level of stability was achieved with the addition of 1% FBS. The addition of 0.05 g/L rHSA or 0.1% PF68 also significantly improved the virus stability and these compounds have the added benefits of having a defined chemical composition compared to FBS and being a safer alternative.