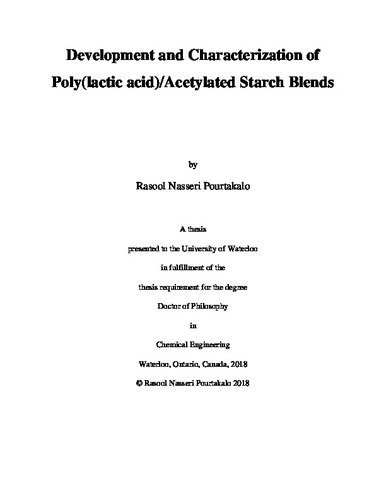 In this study, the acetylation of starch was investigated as a means to improve its thermal processability and compatibility with poly(lactic acid) (PLA) and ultimately widen the range of potential applications for PLA/acetylated starch (AS) blends. The work was divided in two parts: (1) the characterization of AS according to degree of substitution (DS) and (2) the preparation and characterization of PLA/AS blends. The crystalline structure of AS, examined by X-ray diffraction, was destroyed upon acetylation. Differential scanning calorimetry (DSC) revealed that the removal of the crystalline structure during acetylation facilitated molecular movement and glass transition which should facilitate the thermal processability of AS. Decreased molecular weight of AS upon acetylation, which leads to the improvement of thermal processability, was confirmed by dilute solution viscometry. Thermogravimetric analysis (TGA) showed improved thermal stability upon acetylation which widens the processing temperature window of AS. Lower hydrophilicity of AS was revealed by contact angle analysis which is expected to generate more effective interactions with conventional polymers. Enhancement of the thermal expansion (measured by thermomechanical analysis (TMA)) and the lower density (measured by suspension) should improve the compatibility of AS with conventional polymers. The molecular mobility of AS with degree of substitution (DS) 1.5 and 3 was investigated by temperature-modulated DSC (TMDSC) and solid-state 13C NMR (SS-NMR). The relaxation time of hole formation, estimated from TMDSC data, was proposed as the representative of α-relaxation time near T_g. The T_g estimated from the VFT model was similar to the T_g measured by DSC and by heat-cool mode TMDSC supporting the analogy between the relaxation time of hole formation and the α-relaxation time. The cooperative rearranging region (CRR) size, investigated by heat-cool mode TMDSC, was smaller for DS3 compared to DS1.5 which was attributed to the disruption of hydrogen bonds. TMDSC experimental data at moderate temperature, predictions at ambient temperature and SS-NMR results at ambient temperature suggest different mobility of acetylated starch according to DS. The acetylation of starch generated PLA/AS blends with distinct properties. A biphasic morphology was predicted by the compressible regular solution (CRS) model and confirmed by scanning electron microscopy (SEM) observations for all PLA/AS blends, except the PLA/DS3 blend. The thickness of the interphase of the biphasic PLA/AS blends, estimated theoretically from the properties of the pure component and experimentally by small angle X-ray scattering (SAXS), increased with increasing DS of AS. The estimated interphase was generally related to the length scale of the dynamic heterogeneity of the PLA matrix. Slowdown of the PLA chain dynamics at the interphase region was estimated for PLA/DS0 and PLA/DS1.5 blends and related to the hydrogen bonding between the PLA chains and AS observed by FTIR. The properties of PLA/AS blends were affected by the DS of AS. The thermal stability of PLA/AS blends, obtained by TGA, was improved compared to neat PLA. DSC results indicated that AS had a plasticization and nucleation effect in the PLA/AS blends. The highest tensile strength, toughness, and impact strength was achieved when DS2.5 was added to PLA which may reflect the biphasic structure and the thick diffused interphase of this blend. The water diffusion coefficient and the water vapor permeability (WVP) of PLA/AS blends were influenced by the presence of AS. The water diffusion coefficient decreased while the WVP increased for PLA/AS blends by incorporation of AS. The rate of crystallization of neat PLA and PLA/AS blends with different DS were investigated. The PLA/DS0.5 and PLA/DS1.5 blends showed the highest and the lowest rate of crystallization in isothermal crystallization conditions, respectively. The highest rate of crystallization in isothermal crystallization conditions for the PLA/DS0.5 blend may reflect the highest nucleation activity of DS0.5 along with the faster dynamics of the PLA chains. In the context of the PLA/DS1.5 blend, the highest initial degree of crystallinity may seem contrary with the lowest crystallization rate of this blend in isothermal crystallization conditions. The non-isothermal crystallization investigation, however, revealed similar rates of crystallization for the PLA/DS1.5 blend compared to the other PLA/AS blends at the lowest cooling rate (2°C/min) while having the fastest rate of crystallization at the highest cooling rate (5°C/min). The positive activation energy for the crystallization of the PLA/DS1.5 blend may reflect an endothermic process in the crystallization of this blend as a result of interfacial interactions. The largest amorphous phase thickness observed by SAXS for the PLA/DS1.5 blend could explain the significance of the interfacial interactions in this blend. Finally, the results of this study showed that the acetylation of starch is a promising avenue for PLA/starch blends. Increasing the processability of starch and its compatibility with PLA through acetylation, provides the opportunity of making a wide range of materials with different applications. Various mechanical, thermal, and water transport properties, transparency and crystallization behavior can be achieved by incorporating AS with different DS into PLA. For final applications, the effect of AS concentration on the properties of the PLA/AS blend should be investigated. The concentration of the AS dispersed phase in PLA/AS blends should lead to differences in morphology, interfacial characteristics and ultimately properties of the blend. Transparency, visual appearance and degradation rate of the blends are also very important factors in final applications that need to be studied in the future.