Exploring the association between cannabis use, depression, anxiety and flourishing in youth: a cross-sectional analysis from year 5 of the COMPASS Mental Health pilot data 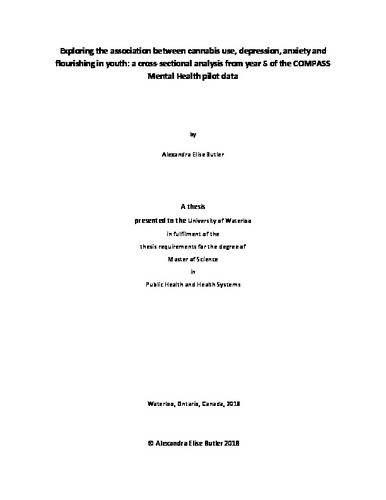 Cannabis use and mental health problems are highly prevalent among Canadian youth. While repercussions associated with cannabis are ubiquitous throughout the population, youth are at an increased risk as the brain is exceptionally susceptible to adverse effects during this stage of development. Youth are at a disproportionate risk for addiction, developing a cannabis use disorder, depression, anxiety and psychosis. Moreover, the risk of developing a substance use problem is doubled in people with mental illness compared to the general population, whereby at least 20% of people with a mental illness have a co-existing substance use problem. Gaps remain within the literature that explore how the effects of positive wellbeing, in the presence or absence of mental illness, can serve as a protective measure against cannabis use. The objective of my thesis was to examine if depression or anxiety were associated with youth cannabis use; and investigate whether flourishing moderates these associations. My approach was guided by the differential susceptibility framework and used a cross-sectional analysis of the mental health module pilot data collected in year 5 (Y5[2016-2017]) of the COMPASS study. Data from 8,179 grades 9-12 students were collected from 10 secondary schools in Ontario and British Columbia, Canada. Participants were included based on a complete case analysis for a total of 8,040 students being eligible participants. Self-report questionnaires were used to assess symptoms of depression [CESD-R-10], anxiety [GAD-7], flourishing [Deiner’s Flourishing Scale] and cannabis consumption using measures that assess cannabis ever use and frequency of use. Logistic regression analysis (binary and ordinal) and product-term interactions were used to examine the associations between mental health and youth cannabis use, and the potential moderating effect(s) of flourishing. In my sample, 33% of participants had ever used cannabis, 51% and 38% reported elevated depressive and anxiety symptoms, respectively. Associations between depression, anxiety, and cannabis use were no longer significant when flourishing was added to the models. In addition, there was no evidence suggesting a moderating effect of flourishing as all interactions were not statistically significant. Instead, robust associations were found between flourishing and cannabis use. Indicators of mental wellbeing, such as flourishing, appear to be associated with a lower likelihood of cannabis use, even after controlling for depression and anxiety. Results suggest prevention strategies for youth cannabis use should aim to foster mental wellbeing among all youth, rather than exclusively targeting those experiencing mental health problems. Future longitudinal studies should test the sequential relationship between cannabis use and changes in both positive and negative mental health.

Alexandra Butler (2018). Exploring the association between cannabis use, depression, anxiety and flourishing in youth: a cross-sectional analysis from year 5 of the COMPASS Mental Health pilot data. UWSpace. http://hdl.handle.net/10012/13215