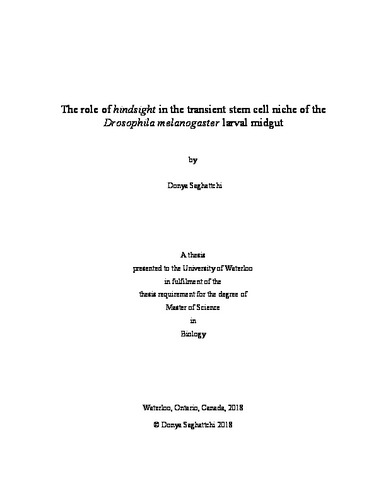 The composition of the larval Drosophila midgut includes cells known as adult midgut precursors (AMPs) that represent the founder cells for the adult midgut. During the first and second larval instar stages, AMPs are solitary cells that proliferate and migrate along the length of the basal surface of the larval midgut (Jiang & Edgar, 2009). During the third instar larval stage, AMPs are observed as clusters that are encapsulated by a new differentiated cell type, the Peripheral Cell (PC). The PC is thought to function as the transient stem cell niche that prevents AMP differentiation and over-proliferation. During the larval-to-pupal transition, AMP differentiation results in the formation of a population of absorptive enterocytes (ECs) and the adult intestinal stem cells (ISCs). Subsequent to the establishment of the adult ISCs, ISCs divide asymmetrically to produce committed daughter cells known as enteroblasts (EBs). Further differentiation of EBs can result in an additional cell type of the adult midgut, the secretory enteroendocrine cell (EE), as well as further ECs. During AMP differentiation, AMPs are released from the PCs, some of which go on to form a transient pupal midgut. The transient midgut and other PCs are ultimately removed by programmed cell death. In investigating the role of the transcription factor Hindsight (homolog of human Ras Responsive Element Binding Protein I) in this system, we have found that Hindsight is required in the larval midgut during the process of PC differentiation. Additional analysis addressed the cell lineage of the PC with respect to AMP and was inconclusive. Live imaging larval midgut explants revealed that the PC/AMP clusters are not autonomous, that these clusters can merge, and that PC cells are highly motile and dynamic.

Donya Saghattchi (2018). The role of hindsight in the transient stem cell niche of the Drosophila melanogaster larval midgut. UWSpace. http://hdl.handle.net/10012/13214