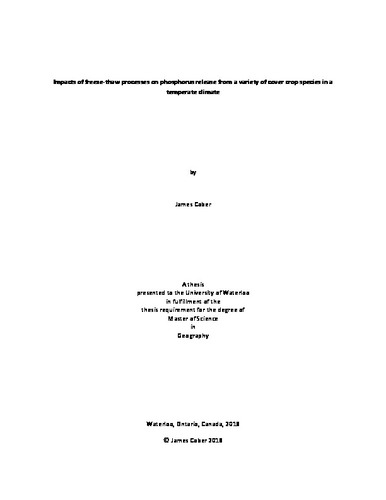 Cover crops (CC) are grown by farmers as an agricultural best management practice (BMP) to improve soil health during the non-growing season (NGS), and potentially reduce soil erosion. Some managers have cautioned against the use of CC due to their potential to act as sources of phosphorus (P) following exposure to freeze-thaw cycles (FTC), given that P has been strongly linked to eutrophication and algal blooms in freshwater systems. Existing literature on the effects of FTC on CC has indicated that the degree of P leaching may be influenced by multiple factors, including the number and/or magnitude of FTC, CC species, and the duration, intensity, and type of leaching event. However, much of the research has been done in laboratory studies, using conditions that are not representative of temperate climates or practices used in Southern Ontario. The objectives of this thesis were to evaluate the effects of FTC intensity and CC species on P release, using conditions and CC species commonly used in Ontario. These objectives were addressed in two separate experiments. The first experiment was done in the laboratory, where clippings of five CC species were exposed to five FTC at varying intensities (4 °C, -4 to 4 °C, -18 to 4 °C, and -18 to 10 °C), prior to extraction of P and nitrogen (N). The impact of termination was evaluated by comparing living CC samples to CC which were terminated with glyphosate. The second experiment was done in the field, and included seven plots of different CC species and mixtures. Plant and soil samples were analysed for P content throughout the NGS, and runoff and shallow groundwater were sampled on an event basis to evaluate the timing of P release from CC and the pathways through which the P moved. This thesis showed that CC species ranged greatly in P released after FTC, but N leaching was unaffected. Heavy frost (< -18 °C) increased P release, particularly from frost-intolerant species, whereas minimal FTC (> -4 °C) did not. Termination resulted in increased P and ammonium-N release from all species, but did not have an additive effect in combination with FTC. In a field setting, P release from CC was smaller in magnitude than was observed in the lab, consistent with the more moderate air temperatures that occurred. However, P release from CC was not related to P concentrations in surface soils and shallow groundwater, and, the pool of water extractable P was much smaller in the CC than in surface soil (5 cm). This thesis has shown that the tested CC species did not present risk for increased edge of field P loss, which is predicted to be consistent with other CC species grown in temperate climates. Planting CC should continue to be promoted as a BMP in Southern Ontario; however, in regions with colder climates, frost-tolerant CC species are recommended.

James Cober (2018). Impacts of freeze-thaw processes on phosphorus release from a variety of cover crop species in a temperate climate. UWSpace. http://hdl.handle.net/10012/13213