Empirical Essays in Water and Electricity Use 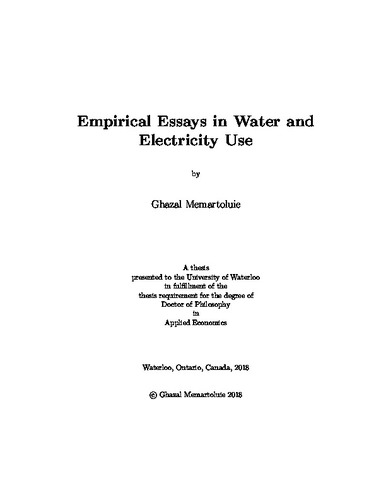 This thesis consists of three self-contained essays evaluating the impacts of educational attainment and average income at the community level on water consumption, the effects of different sources of energy on wholesale electricity rates and the effects of eliminating coal-fired electricity generation on air quality. The first chapter looks at the impacts of educational attainment and average income at the community level on water consumption. The focus of this paper is on the three cities of Cambridge, Kitchener and Waterloo. In this chapter, we construct a unique household-level panel dataset that has monthly water consumption data of 22,000 households from 2012-2014. Our study shows that water consumption decreases as income at the Dissemination Area (DA) level increases. Our findings also show that educational attainment affects water use in a different way at different education levels in the following sense: increasing educational attainment at lower levels of education (from no certificate to high school certificate) increases water consumption, but the effect reverses when people receive post-secondary education. In addition, our study suggests that although education at different geographical levels affects household water consumption in different ways, there is a turning point where the explained relationship changes direction. By creating and utilizing a unique panel data from the Independent Electricity System Operator (IESO) and Statistics Canada, over 2009 to 2014, the second chapter intends to analyze the effects of different sources of energy on wholesale electricity rates to see how the considerable shifts in electricity fuel mix since $2009$ have impacted the Hourly Ontario Energy Price (HOEP) and Global Adjustment (GA). The study demonstrates that while less reliance on coal has resulted in an upward pressure on the HOEP, the increase in other sources of energy such as nuclear, hydro and wind power generations outweighed the effects of eliminating coal, which explains why the average HOEP fell from 26.4 $\$/MWh$ in 2012 to $23$ $\$/MWh$ in 2014. On the other hand, the GA in terms of $\$/MWh$, rose by almost $50\%$. Although less coal is significantly associated with higher GA payments, we do not find that more wind and nuclear power generation have resulted in higher GA payments. In addition, our results show that more gas power is correlated with a reduction in GA. Lastly, the third chapter uses the hourly air pollutant data associated with four cities of Toronto, Hamilton, Ottawa and Sarnia in addition to the data on hourly electricity generation from coal, gas, hydro, nuclear, wind and other (solar and biofuel) type of power plants for the period of $2009$ to $2016$. The pollution data are obtained from the Ontario Ministry of the Environment and Climate Change and the data on fuel mix are obtained from the Independent Electricity System Operator (IESO). We estimate the effects of hourly changes in fuel mix on Ozone ($O_{3}$), Nitrogen Oxide ($NO_{x}$), and Particulate Matter ($PM_{2.5}$) over a period in which coal-fired electricity generation was gradually eliminated from the electricity market. The paper also estimates the impacts of fuel mix on the probability of smog days. The results suggest that relative to coal, more nuclear and wind energy is correlated with decreased levels of $NO_{x}$ and $PM_{2.5}$. In addition, an increase in nuclear powered generation is associated with reduced $O_{3}$ levels. On the other hand, the results suggest that in general, the correlation between different types of fuel mix and the elimination of smog days are not statistically significant.