Chivalry is far from dead: Misperceiving the link between men's benevolent and hostile sexism 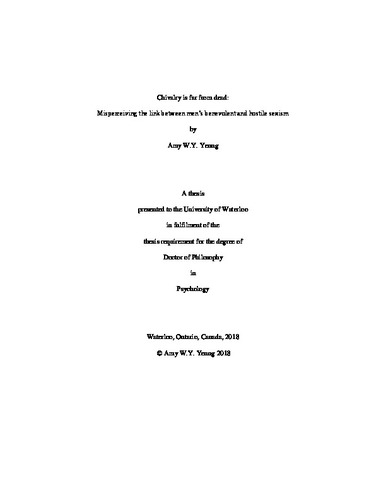 Although prejudice has traditionally been conceptualized as a univalent antipathy towards a social group, sexist prejudice represents a more nuanced ambivalent attitude that mixes both hostile and benevolent elements. Theory and research on ambivalent sexism indicates that hostile and benevolent sexist attitudes towards women reinforce one another and function together to perpetuate women’s disadvantaged social status. Indeed, at both the individual and population level, endorsement of benevolent sexism tends to be positively correlated with endorsement of hostile sexism. However, because benevolent sexism has a positive veneer people may fail to recognize that a person who is high in benevolent sexism is likely to also be high in hostile sexism whereas a person who is low in benevolent sexism is likely to be low in hostile sexism. In particular, I hypothesized that because benevolent sexism is the dominant cultural model for how men should express their respect for women, a man who rejects benevolent sexism may be at risk of being misperceived as a hostile sexist who disrespects women rather than recognizing that such a man may reject benevolent sexism because he promotes women’s independence and equality with men. By contrast, people may more readily understand that a woman may reject benevolent sexism for such egalitarian reasons. To test these hypotheses I conducted a series of studies in which I experimentally manipulated a target individual’s gender and then varied whether this individual endorsed or rejected either benevolent sexist beliefs or hostile sexist beliefs. After participants viewed this target’s profile they were asked to estimate the target’s levels of the other variety of sexism, their support for female professionals, their qualities as a spouse and parent, and their likelihood of committing domestic abuse (Studies 1-3). In addition to these perceptions of the target’s sexism-related attitudes and behaviours I also measured participants’ perceptions of the target’s more general warmth and agreeableness, relationship qualities, and moral values (Study 3). Results showed that a male target who rejected benevolent sexism (BS) was perceived to be more hostilely sexist, less supportive of female professionals, less good as a parent and spouse, and more likely to perpetrate domestic violence compared to a male target who endorsed BS and also compared to a female target who rejected BS (Studies 1 and 2). This result suggests that people indeed perceive an illusory negative relationship between men’s BS and HS, whereas for women they recognize that low BS can go along with low HS. The results of Study 2 replicated the results of Study 1 and addressed some issues with how endorsement versus rejection was operationalized. Study 3 demonstrated that people’s misunderstanding of the relationship between BS and HS in men leads them to evaluate a man who rejects BS more negatively on warmth, agreeableness, interpersonal qualities, and morality. Finally, Study 4 examined the accuracy of participants’ judgments of the low BS male target from Studies 1-3 by comparing participants’ predictions to the scores of real-life participants whose BS scores matched those of the target. Despite the relative rarity of univalent sexists in real life, participants were much more likely to assume that low BS men were univalent hostile sexists rather than recognizing that it is actually more likely that men who reject BS also reject HS. Cumulatively these results indicate that people have a fundamental misunderstanding of what a man’s endorsement versus rejection of benevolent sexism indicates about his gender-related attitudes and behaviour as well as his broader character. The bias to assume that a man’s rejection of benevolent sexism indicates disrespect for women provides insights into the social psychological processes that help to perpetuate benevolent sexist ideology. The societal implications of these misperceptions and directions, possible moderators and cross-cultural variations, and directions for future research are discussed.