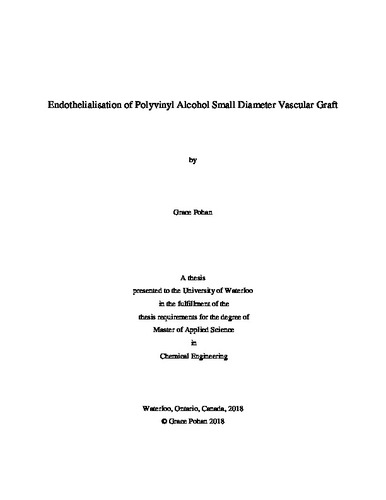 As one of the possible treatments for cardiovascular disease (CVD), bypass grafting in small diameter vessel (≤ 6 mm diameter) is often employed. However, maintaining the patency of this small diameter graft remains a challenge despite 50 years of research in this area. While ePTFE graft performance as a large diameter vascular graft is commendable and has been widely used in patients, the performance of ePTFE small diameter vascular graft is disappointing with 65% graft patency rate at 1 year.1 It was observed that graft occlusion is caused mainly by thrombus or intima hyperplasia (IH) formation. This study proposes the use of sodium trimetaphosphate (STMP) crosslinked polyvinyl alcohol (PVA) as small diameter vascular graft due to its low thrombogenicity and excellent mechanical property. However, PVA hydrophilicity is known to hinder any extracellular matrix (ECM) protein or cell attachment on its surface, while surface endothelialisation is believed to prevent thrombus and IH formation. We hypothesize that NH3 plasma luminal modification on the luminal surface of PVA along with hydrogel patterning with microtopography can improve surface interaction with endothelial cells. Additionally, we speculate the effect of terminal sterilization step on PVA grafts is minimum and the grafts can maintain its patency at 28 to 30-day timepoint. Endothelial cell attachment on PVA surface was found to improve on plasma treated luminal surface with 2 µm gratings topography. Endothelial gene expressions (PECAM1 and NOS3) were, however, found to be downregulated on plasma treated substrates. However, platelet and fibrin activation of the microgratings topography done with baboon ex vivo shunt model was comparable or lower than ePTFE graft control and collagen coated glass conduit. Furthermore, sterilization of PVA graft with γ-radiation was not found to have any toxic effect on cells and interestingly improve endothelialisation. While EtO sterilization was shown to alter PVA mechanical and material properties, γ-radiation only affected PVA graft mechanical compliance. Gamma irradiated small diameter PVA graft (2 mm ID) without any surface topography was implanted with end-to-side anastomoses at the right common carotid artery to assess PVA performance over 28-30 days in rabbit models. Five out of 7 PVA grafts were found patent after 28-30 days of implantation, while only 1 out of 2 ePTFE grafts were patent after 28-30 days. Endothelialisation of PVA graft in vivo was, however, not yet observed which compels the importance of plasma treatment and topography incorporation in the future work.