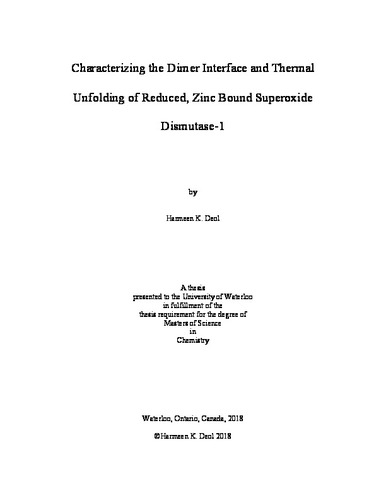 Superoxide dismutase 1 (SOD1) is a ubiquitously expressed metalloenzyme that reduces oxidative stress in cells by catalyzing the dismutation of superoxide radicals. Mutations in the gene encoding for SOD1 have been linked to the fatal neurodegenerative disease amyotrophic lateral sclerosis (ALS). The prevalent hypothesis for how mutant SOD1 causes disease is the formation of toxic intracellular protein aggregates. SOD1 undergoes posttranslational modifications in vivo, including metal binding, disulfide bond formation, and dimerization, to reach its final maturation form, a stable homodimer. Recent studies support the theory that more immature forms of SOD1 may play a key role in the disease pathology, and the monomeric species may be linked to toxicity. The zinc-bound form of SOD1 with a reduced disulfide bond (E,Zn-SOD1SH) has been the center of debate with contradictory literature published regarding whether it exists as a monomer or dimer. Although this key form has been widely discussed, relatively little has been characterized compared to other forms of SOD1. Here we investigate E,Zn-pWTSH SOD1 with certain fALS mutants using a combination of isothermal titration calorimetry (ITC) to measure dimer dissociation, and differential scanning calorimetry (DSC) to measure global unfolding of the protein, in order to dissect the contribution of dimer and monomer to protein stability. Results are compared to the effects of mutations in other forms of SOD1 to better understand protein maturation and different roles of SOD1 species in misfolding and disease.