Exploring the Food Choices of Muslim Arab Immigrants in Canada 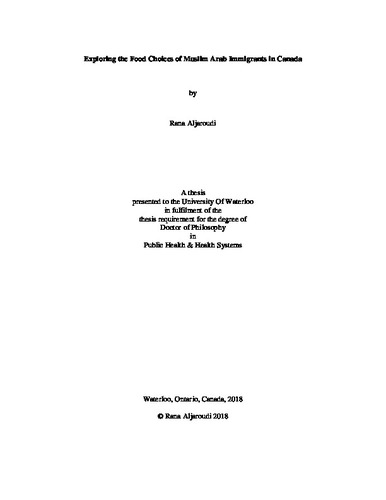 Objectives: This study aimed to investigate Arab Muslim immigrants' lived experiences in Canada and perceptions around food choice, including whether participants maintained their traditional diet or incorporated more Western foods. Method: This study utilized the phenomenological methodology with a sample of Arab Muslim mothers who immigrated to Canada 5 years or more ago who currently have school-age children and reside in the metropolitan areas of Kitchener-Cambridge-Waterloo and Mississauga, both of which are located in Southern Ontario, Canada. Data were collected in Arabic by semi-structured individual interviews, focusing on food availability, meal preparation and food choices in Canada. Data were translated into English and coded to facilitate analysis by NVivo11 Qualitative Analysis Software. Member checking was used in order to meet the criteria of credibility. To facilitate transferability, thick descriptions were written so that it will be possible for others to gain a clear understanding of the determined themes. A sample (2) of the 24 interviews were entered into NVivo by a second qualitative researcher as well as the original researcher, in order to check for accuracy and completeness, and the two transcripts were then compared. An adapted version of the Male Arab-American Acculturation Scale (MAAS) was also used to assess participants’ attitudes towards acculturation, and information was also collected on key socioeconomic variables of the household. Results: Participants reported that traditional foods were available at supermarkets, but they expressed concerns over the cost of food and the general lack of flavour and freshness. Some participants reported adjustment of the positive and negative healthy food behavior such as less frying of food; more reading of food nutrition facts and labels. Other participants reported that unhealthy food behavior increased, such as consuming easily prepared meals due to the lack of time; going to restaurants more often and consuming Western food due to children’s preferences to consume food in Western style. The Male Arab-American Acculturation Scale (MAAS) indicated no relation between the adaptation of food behavior or the retention of preparation of traditional food and the degree of acculturation after immigration among Arab Muslims participants. However, there were interesting associations of other socioeconomic variables (such as mother’s work status, length of time in Canada) with food behavior. Since the sample was relatively small and restricted to urban areas in Southern Ontario, the findings are specific to a particular demographic group. However, similar patterns have been observed for Arab immigrants in the United States, and some of the findings are consistent with those for other immigrant groups to Canada. Conclusions: Arab Muslim immigrants to Canada tend to try to balance the maintenance of their traditional dietary habits with being open to Western foods. However, some individuals resist the Western influence more than others. There were varying levels of adherence to religious dietary observances. Other variables could also impact food choices, such as family income, children’s age, level of education of the parents and parents’ work. The acculturation survey (MAAS) results in this study, while intriguing, were inconsistent with the extant literature. Overall, it is evident that the phenomenon of dietary acculturation for Arab Muslim Immigrants to Canada involved an experience of trying to find a balance between carrying forward food-related traditions and trying to adapt and fit into Canadian culture, including Canada’s food culture. Implications: Policy makers and international community focusing on immigration and dietitians as well should consider how they can help Arab Muslim immigrants to combine the healthiest aspects of their traditional diets with the healthier foods available in the West, to help them avoid diet-related health issues such as obesity and diabetes, which could help to reduce healthcare costs and improve health. Efforts such as these could help Arab Muslim immigrants to feel better supported in their new environments. By making Arab Muslims feel more welcomed and at home, this could subsequently improve social cohesion between new immigrants and long-term citizens as well.