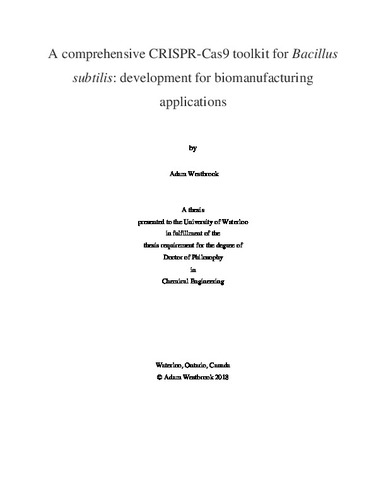 Bacillus subtilis is a model Gram-positive GRAS organism sought after for its robust growth characteristics in inexpensive media, genetic tractability, and ability to secrete products into the extracellular environment. Although B. subtilis has gained widespread acceptance as an industrial workhorse for the production of low-cost enzymes, issues with protein degradation and misfolding, and plasmid instability have hindered its status as a recombinant protein expression host. Efforts aimed at resolving these issues have been partially successful, although strain development to this end has occurred on an insignificant scale relative to Escherichia coli. Accordingly, advanced genetic tools are needed to accelerate the progression of B. subtilis towards full industrial utility. The recently developed clustered regularly interspaced short palindromic repeat (CRISPR)-Cas9 (CRISPR-associated (protein) 9) system has revolutionized genetic manipulation and genome-scale interrogation of gene function across the spectrum of life. CRISPR-Cas9 systems have been developed for established industrial organisms such as E. coli and Saccharomyces cerevisiae, and are highly amenable to scalable strain construction. This thesis encompasses the development of a CRISPR-Cas9 toolkit for B. subtilis, and its application to strain engineering for the production of value-added biologicals. We first developed and validated a CRISPR-Cas9 toolkit facilitating simplified genome editing and transcriptional interference in B. subtilis. To exploit the simplicity of the Cas9-targeting synthetic guide RNA (gRNA), a novel gRNA transcription cassette was constructed that performed equally well compared with the native CRISPR RNA (crRNA)/trans-activating crRNA (tracrRNA) targeting system. To facilitate gRNA eviction and, in turn, continuous editing in the same background, the counter-selectable marker mazF was successfully employed. Multiplexing was subsequently evaluated and although efficiency was acceptable, it was deemed too low to accommodate higher order multiplexing. Consequently, editing templates required for double-strand break (DSB) repair were evaluated to determine optimal homology length (HL) and appropriate format to enhance editing efficiency, and subsequent multiplexing under optimized conditions was highly efficient. Transcriptional interference, i.e. CRISPR interference (CRISPRi), was also demonstrated, resulting in high-level repression of gene expression comparable to that reported for CRISPR-Cas9 systems developed for other organisms. Upon validating the CRISPR-Cas9 toolkit, we applied CRISPRi to enhance heterologous hyaluronic acid (HA) production in strains of B. subtilis via engineering of the cell membrane. Membrane cardiolipin (CL) levels were first enhanced in previously engineered HA-producing strains by overexpressing components of the CL biosynthesis pathway. CRISPRi was then applied to redistribute CL along the lateral membranes of CL-overproducing mutants via repression of the expression of the cell division initiator protein FtsZ, resulting in significant improvements to the HA titer and molecular weight (MW). Moreover, removal of phosphatidylethanolamine and neutral glycolipids from the membrane of HA-producing B. subtilis via inactivation of pssA and ugtP, respectively, has suggested the lipid dependence for functional expression of the hyaluronan synthase from Streptococcus equisimilis (SeHAS). CRISPRi was also applied to reduce the expression of pfkA or zwf, whose respective gene products are enzymes at the branchpoints of glycolysis and the pentose phosphate pathway opposing cell wall biosynthesis, in HA-producing B. subtilis, leading to substantial improvements to the HA titer with a concomitant decrease in the MW. On the other hand, multiplexed repression of both pfkA and zwf expression resulted in significant increases to the HA titer and modest enhancements to the MW. Moreover, the addition of exogenous HA monomers, i.e. glucuronic acid (GlcUA) and N-acetyl-glucosamine (GlcNAc), to B. subtilis cultures markedly improved the HA MW but decreased the HA titer, providing insights into the mechanism of HA biosynthesis by SeHAS in B. subtilis. We also explored the application of hydrocarbons and perfluorocarbons as potential oxygen vectors to address the innate oxygen limitation associated with microbial cultures for HA production. Out of seven compounds evaluated in a preliminary screening, significant improvements to the HA titer and/or cell density were observed in cultures containing n-heptane, n-hexadecane, perfluoromethyldecalin, and perfluoro-1,3-dimethylcyclohexane. Adjustments to the vector concentration, timing of vector addition, and the agitation rate resulted in further enhancements to the HA titer, and the results suggest that certain vectors may alter the functional expression of SeHAS in B. subtilis, and that higher shear rates may be beneficial for HA production. Finally, the capacity of the toolkit was fully assessed through a second case study in which B. subtilis strains were engineered for L-valine overproduction. The native L-valine biosynthetic pathway was engineered to relieve transcriptional and allosteric regulation in the presence of excess amino acids, leading to substantial improvements to the L-valine titer, compared to the wild-type strain. Further investigation revealed that pyruvate availability and competing amino acid biosynthesis limited L-valine overproduction in B. subtilis, and strain engineering to simultaneously resolve these bottlenecks resulted in an ~50-fold increase in the L-valine titer, relative to the wild-type strain. Through this case study, recombination was identified as the step that limits toolkit performance, leading to the identification of potential strategies to overcome this limitation. Collectively, we have developed a comprehensive and highly effective CRISPR-Cas9 toolkit for B. subtilis, and have extensively demonstrated its utility for advanced strain engineering in biomanufacturing applications. Moreover, we have developed novel HA-producing strains of B. subtilis that may be of industrial value, and have provided valuable insight into the application of oxygen vectors to mitigate oxygen limitation in microbial cultures for HA production. Lastly, we have tested the limits of our toolkit through the construction of L-valine-overproducing B. subtilis strains, resulting in a potentially industrially relevant production platform for this niche amino acid, and identification of the bottleneck limiting toolkit performance. Thus, it is anticipated that the CRISPR-Cas9 toolkit described herein will be an invaluable resource for scalable strain construction at the academic and industrial levels.