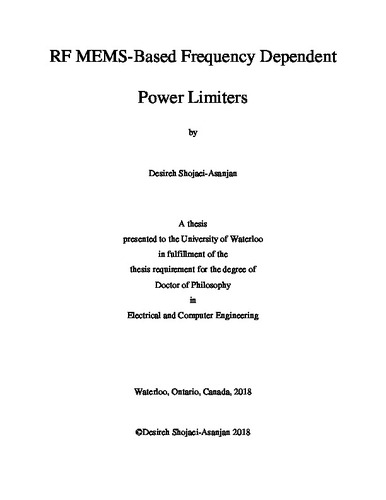 Microwave power limiters are passive devices that are widely used to protect receivers from large interfering signals. Conventional radio frequency (RF) power limiters attenuate both desired and undesired signals in the entire frequency band. The need for frequency-dependent power limiters (FDPLs) arises in cases where the system dynamic range is frequency-dependent and the threshold level is dependent on the frequency band. RF micro-electro-mechanical systems (RF MEMS) switches self-actuate under high RF power and are well-known for their linearity and very low insertion loss. A FDPL can benefit from all the advantages of RF MEMS switches, particularly the linearity. In this study, a novel approach to FDPLs is proposed. RF MEMS switches are integrated with bandpass filters to form a power limiter where the output RF power is limited to specific levels that can vary with the frequency band. Both non-planar and planar versions of FDPLs are presented using circulators and hybrids, and RF MEMS-based power limiters are analyzed theoretically and experimentally for one frequency band. The limiter attenuates the high power signal only within the bandwidth of the integrated filter. The design of the proposed power limiter is expanded to achieve power limiting for various frequency bands. The flatness of the threshold level can be set to the desired value by controlling the return loss of the filters used in the FDPL circuit. Measured results for an FDPL circuit are presented, demonstrating that the limiting power level can be controlled by adjusting the dc bias of the MEMS switches. The commercially available electrostatically actuated switches OMRON and Radant are employed for the realization of the FDPL. Additionally, tunable FDPL circuits are fabricated and measured, demonstrating the feasibility of realizing adaptive frequency-dependent power limiters. In order to improve the controllability of the proposed MEMS-based FDPL circuits, both electrostatically-actuated and thermally-actuated switches are investigated theoretically and experimentally for use in power limiter applications. It is concluded that MEMS thermally- actuated switches provide better controllability of the self-actuation RF power level through adjustment of the bias voltage to the thermal actuator. Additionally, a novel concept for realizing an RF power limiter for protecting superconductor digital receivers is proposed. A lumped-element niobium-based filter is used as a protection circuit. It consists of lumped-element resonators formed using spiral inductors and metal- insulator-metal capacitors integrated on a multilayer niobium process. The circuit operates as a bandpass filter at low power levels, allowing RF signals to pass, and as a reflector at high power levels. The lumped-element filter circuit is studied in detail to explain the performance of the filter at high power levels. It is concluded that some of the lumped-element inductors switch from being inductors when operating at low power levels to being capacitors when operating at high power levels. When the lumped-element inductors switch to capacitors, the filter circuit that consists of L-C resonators switches to a circuit that consists of capacitors, causing the input power to be reflected back. Both theoretical and experimental results are presented to verify this phenomenon. In addition to applications in power limiters, the concept can be employed to realize transmit/receive (T/R) switches in order to isolate the transmit circuit from the receive circuit.