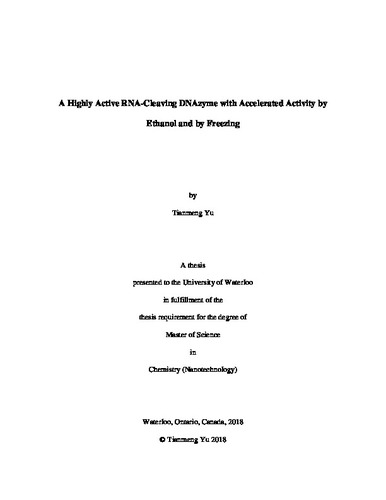 DNAzymes are functional DNA molecules with catalytic activities. The EtNa is an example of a RNA-cleaving DNAzyme that catalyzes the cleavage reaction of a phosphodiester bond in the presence of metal ions, such as Na+ or Ca2+. It was initially selected during the isopropanol precipitation step of an in vitro selection, where the selection library was incubated at low temperature with a high concentration of Na+ and isopropanol. Although inactive with the intended cofactor, the RNA cleavage activity of the EtNa with Na+ was determined to be significantly increased in the presence of ethanol. The enhanced activity was due to the lower dielectric constant of ethanol, in turn increasing the electrostatic interaction of Na+ and the EtNa. The first chapter of this thesis is devoted to the introduction of nucleic acids and DNAzymes. In particular, the previously published work related to the EtNa DNAzyme. In chapter two, the effect of ethanol on the Ca2+-dependent activity of the EtNa DNAzyme was examined. The cleavage results showed that its activity with low concentrations of Ca2+ was enhanced by the addition of ethanol. However, with a concentration higher than 2 mM Ca2+, inhibition of the DNAzyme activity was observed. When testing the effect of ethanol on other RNA-cleaving DNAzymes, no significant increase in activity was shown while 50% ethanol slowed down their RNA cleavage reaction. Therefore, the boosted activity was unique to the EtNa DNAzyme. Besides, the performance of the EtNa based biosensor was improved with the addition of organic solvents. With 30% ethanol, the sensor achieved a detection limit of 1.4 μM Ca2+, which was a 16-fold better than that in water. In chapter three, the effect of freezing on the activity of the EtNa DNAzyme was characterized. Acceleration in the cleavage reaction was achieved by freezing the EtNa in water with Na+. The apparent dissociation constant reached 6.2 mM Na+ under the frozen condition, which is over 20-fold tighter than that at room temperature. With 10 mM Na+, the EtNa has a cleavage rate of 0.12 h-1 after freezing at -20 °C. This effect is also unique to the EtNa, while all the other tested DNAzymes were inhibited by freezing except for the Na+-specific NaA43 DNAzyme. Freezing also inhibited the EtNa activity if Ca2+ was used, which demonstrated the importance of the metal cofactor to be monovalent. The enhancement in activity can be attributed to the freeze-induced concentration effect of EtNa and monovalent Na+ in the micropockets formed between ice crystals, whereas divalent metal ions such as Ca2+ may misfold DNA under similar conditions. Taken together, using ethanol, divalent Ca2+, and freezing all achieved the same purpose of enhancing electrostatic interactions between metal species and the DNAzyme. This is summarized in chapter four, where some future directions are outlined.