Quiet In The Rear: The Wehrmacht and the Weltanschauungskrieg in the Occupation of the Soviet Union 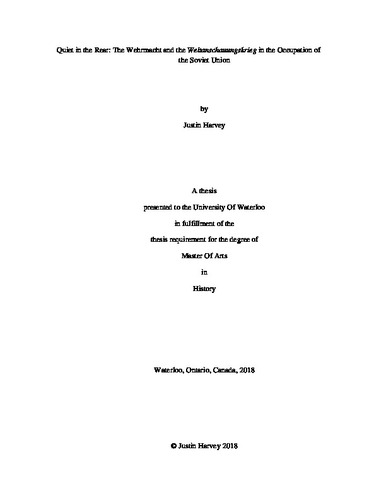 Historians widely acknowledge that the Second World War witnessed a substantial degree of ideology in the conflict itself. This paper will establish the degree to which the ideology of National Socialism shaped the Wehrmacht’s decision-making process prior to and during their occupation of the Soviet Union, as well as the outcomes of those decisions. To this end, those in positions of authority in the military – including Hitler himself, the OKW, the OKH and various subordinate commanders – will be examined to determine how National Socialist tenets shaped their plans and efforts to quell and exploit the occupied Soviet Union.

Justin Harvey (2018). Quiet In The Rear: The Wehrmacht and the Weltanschauungskrieg in the Occupation of the Soviet Union. UWSpace. http://hdl.handle.net/10012/13186