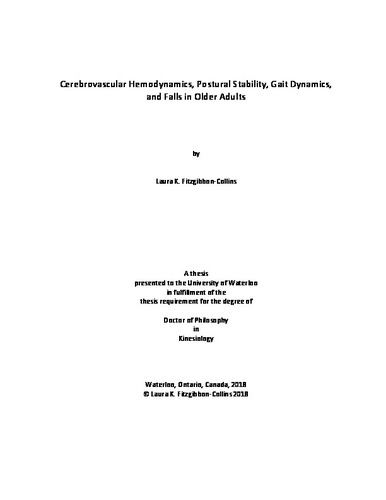 Injurious falls in community-living older adults are associated with standing up suggesting that cerebral hypoperfusion following a postural transition might be a contributing factor. A large population study has recently indicated that one fifth of older adults do not fully recover BP after standing from a supine posture. The purposes of this thesis were to provide a comprehensive assessment between posture-related cerebral hypoperfusion and impaired postural stability, altered gait and falls in older adults. This thesis measured arterial blood pressure regulation and cerebral tissue oxygenation (tSO2) during orthostatic stressors including 3 different transitions to standing in older adults (n=77, ages 69-100 years, average = 86.6±6.6 years) and 2 different transitions to walking in a sub-group of these older adults (n=27, ages 71-101 years, average = 86.8±5.3 years). Primary results included the finding that, like the altered blood pressure responses, 19.5% of older adults had low tSO2 on standing, and they had poorer postural stability. It was also found that a brief 10-s sitting-pause time improved tSO2 and postural stability when performing a supine-sit-stand. Prospective tracking of older adults for 6-months revealed a trend to an increased likelihood of a future fall in those who had the greatest drop in tSO2 on standing. Older adults with low tSO2 (≤60%) during walking had compromised gait dynamics (increased step-step variability). Although gait speed was not directly related to reduced tSO2, the increased mean gait cycle time and stance time associated with changes in OxHb of the older adults with low tSO2 were significantly associated with reduced gait speed. Increased vascular stiffness was associated with lower CBF and altered cerebrovascular hemodynamics while walking as well as lower gait speed. Collectively, the findings from these two investigations support a relationship between cerebral hypoperfusion induced by transitions from supine to upright posture and compromised standing and walking stability with consequences for increased fall risk.