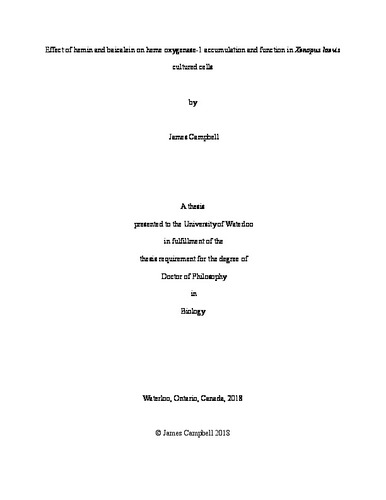 Heme oxygenase-1 (HO-1) is a stress-inducible enzyme that catalyzes the rate-limiting step in the hemin degradation pathway. Studies in mammalian systems determined that HO-1 promoted cell survival by reducing oxidative damage in cells exposed to heavy metal toxicants. While most of the knowledge regarding HO-1 synthesis and function was derived from mammals, less is known about this stress-inducible protein in poikilothermic vertebrates such as amphibians and fish. The aim of the present study is to investigate stress-induced accumulation of HO-1 and its potential cytoprotective effects in A6 kidney epithelial cells derived from the aquatic frog, Xenopus laevis. Treatment of A6 cells with hemin, baicalein (a plant flavinoid) or CdCl2 induced HO-1 accumulation in a concentration- and time-dependent manner. While CdCl2 treatment also induced the accumulation of the heat shock proteins (HSPs), HSP70 and HSP30, their accumulation was not detectable in cells treated with baicalein or hemin. Immunocytochemical analysis revealed that hemin, baicalein and CdCl2 treatment induced the accumulation of HO-1 primarily in the perinuclear region in a granular pattern with some localization in the nucleus. While treatment of cells with 25 μM hemin or 200 μM baicalein induced slight disorganization of actin filaments, exposure of cells to higher concentrations of CdCl2 (e.g. 200 μM) produced pronounced actin cytoskeletal disorganization and membrane ruffling. Stress-induced accumulation of HO-1 was the result of de novo synthesis since upregulated HO-1 levels were inhibited by the transcriptional and translational inhibitors, actinomycin D and cycloheximide, respectively. Furthermore, the heat shock factor 1 (HSF1) inhibitor, KNK437, suppressed hemin-, baicalein-, and CdCl2-induced HO-1 accumulation. Since previous studies reported that stress-induced HO-1 accumulation may be associated with oxidative stress, the levels of the ROS-responsive transcription factor, Nrf2, were measured and found to increase in cells treated with baicalein and CdCl2 but not with hemin. However, levels of the antioxidant enzyme, peroxiredoxin 5 (PRDX5), were elevated in response to all three stressors. Finally, analysis of reactive oxygen species (ROS) production using a fluorescent probe detected enhanced ROS amounts in A6 cells treated with baicalein and CdCl2 but not with hemin. In another approach, A6 cells, which were incubated with buthionine sulfoximine (BSO), an inhibitor of glutathione synthesis and a known inducer of ROS, enhanced HO1 accumulation in cells treated with CdCl2 but with either hemin or baicalein. This study also determined that HO-1 accumulation was required for cytoprotection of A6 cells to CdCl2 since cotreatment with the HO-1 enzyme activity inhibitors, tin protoporphyrin (SnPP) and zinc protoporphyrin (ZnPP), enhanced cadmium-induced actin cytoskeleton dysregulation and the formation of aggregated protein and aggresome-like structures. Finally, this study examined whether treatment of A6 cells with hemin or baicalein could ameliorate the toxic effects of 275 μM of CdCl2. Hemin and baicalein both inhibited the effect of cadmium on the dysregulation of actin cytoskeleton and the accumulation of aggregated protein and aggresome-like structures. Furthermore, this protective effect was suppressed with the addition of SnPP. In summary, this study has shown that HO-1 accumulation may play a vital role in regulating the stress response against cadmium treatment in Xenopus laevis. Additionally, the present research has revealed, for the first time, that cotreatment of cells with low concentrations of either hemin or baicalein inhibited the formation of cadmium-induced aggregated protein and aggresome-like structures whereas cotreatment with HO-1 enzyme activity inhibitors suppressed this phenomenon.