The adaptive elements of disparity vergence: Dynamics and directional asymmetries. 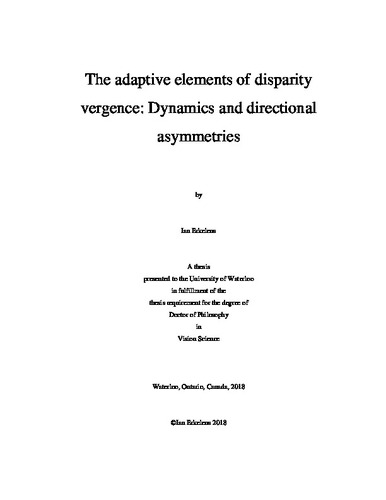 Vergence eye movements alter the angle between the two visual axes, creating changes in binocular fixation distance. They are primarily stimulated by retinal image disparities, but can also be driven by inputs from ocular accommodation (accommodative-vergence) and perceived proximity (size) changes. Because of these diverse and complex sensory inputs, the neuro-motor substrates that sub-serve vergence control possess robust adaptive capabilities to manage the interactions with other oculomotor systems (accommodation). This adaptive plasticity in vergence allows for a high degree of precision in binocular alignment to be maintained throughout life in the face of constantly changing environmental demands. The precise alignment of each eyes’ fovea is a fundamental requirement for stereopsis and the perception of depth in 3 dimensions. In a significant portion of the ophthalmic clinical population, the adaptive capacities of vergence are reduced or dysfunctional, leading to difficulties focusing clearly and comfortably at near distances such as books, computer screens and other hand-held devices. Furthermore, new wearable technologies such as virtual and augmented reality increase the demand on the adaptive capacities of vergence by drastically altering the congruency of the sensory inputs to vergence. Currently, our understanding of the mechanisms that underlie this adaptive control and their behavioral limits are limited. This knowledge gap has led to conjecture in the literature regarding proper rehabilitative therapies for clinical dysfunctions of vergence control and in the optimal environmental design parameters that should provide comfortable and compelling user experiences in wearable technologies like VR and AR. The inward (convergence) and the outward (divergence) turning of the eyes in response to retinal disparities are controlled by two separate systems and demonstrate significant directional asymmetries in their reflexive response properties. In general, reflexive divergence responses tend to be slower and longer than their convergence counter-parts. It is unclear whether the adaptive mechanisms are influence by these reflexive asymmetries. It is also unknown whether similar directional differences exist in the different adaptive capacities possessed by vergence. The purpose of the following dissertation was to characterize the effects of stimulus direction on the adaptive behavior of disparity-driven vergence eye movements with an end goal aimed at improving rehabilitation therapies for clinical populations with vergence dysfunction and providing valuable insight for the design and future development of wearable technologies like virtual and augmented reality environments. A series of 4 experiments were conducted in order to characterize the effect of stimulus direction and the physiological limits of the adaptive behavior within the two-main disparity vergence motor controllers, fast-phasic and slow-tonic. In each study, binocular viewing conditions were dichoptic, which allowed retinal disparity to be altered while the accommodative and proximity cues were clamped. Such designs create incongruencies between the sensory stimuli to vergence and thus elicits a much stronger adaptive response for observation than would normally occur when viewing real-world objects. Eye movements were monitored binocularly with a video-based infrared eye-tracking system at 250Hz using the head-mounted EyeLink2 system. A total of 14 adult binocularly normal controls and 10 adult participants with dysfunctional convergence control (convergence insufficiency) were recruited for the main studies. 4 controls completed the first two studies, 10 additional controls completed the third and fourth studies while the 10 participants with convergence insufficiency completed the fourth study. The results of this dissertation make four significant contributions to the current scientific literature pertaining to vergence oculomotor control and plasticity. 1) Both fast-phasic and slow-tonic vergence controllers display directional asymmetries in their general behavior and adaptive responses. 2) Reflexive fast-phasic divergence responses in controls tend to saturate at lower disparity-stimulus amplitudes than convergence under specific viewing conditions. This saturation limit is defined when the primary vergence response amplitude and peak velocity are unable to increase when the stimulus amplitude increases, suggesting saturation in neural recruitment and firing rates. Saturated reflexive vergence responses instead recruit an increased response duration (neural firing time) in order to produce larger amplitude responses. 3) Saturation in the fast-phasic divergence mechanism leads to saturation in the speed slow-tonic vergence adaptation. The function of the underlying reflexive fast-phasic response was found to be associated with the adaptive behavior of the slow-tonic mechanism, suggesting one drives the other, which is consistent with model predictions. 4) Convergence responses from individuals with convergence insufficiency are generally indistinguishable from that of the slower divergence responses of controls. These impaired convergence responses lead to impairment of the adaptive mechanisms underlying each fast-phasic and slow-tonic controller. Clinically, these results suggest that rehabilitative therapies for vergence control dysfunctions should primarily target the performance of the fast-phasic reflexive vergence mechanism. This work also suggests that improvements in adaptive capacities of vergence, known to be the mechanism under-pinning symptom reduction in these patient populations, should follow when reflexive fast-phasic responses are normalized. In terms of wearable technology, the generally limited adaptive plasticity demonstrated within divergence responses when compared to convergence in controls, provides a behavioral explanation for the increase in symptoms of discomfort when viewing distant objects in virtual reality environments. Future investigations should seek to determine the effects of other disparity stimulus parameters, such as contrast and spatial frequency on the adaptive behaviors of both fast-phasic and slow-tonic mechanism. Finally, the cerebellum is known to be central to the adaptation of almost every motor system and yet its role in the different adaptive capacities of disparity-vergence control remain unclear. Future studies should aim to characterize these neural structures role in the different vergence oculomotor adaptive mechanisms described here.