Application and assessment of multi-wavelength measurements of variable chlorophyll a fluorescence for analysis of irradiance stress, physiological state and community composition in freshwater phytoplankton 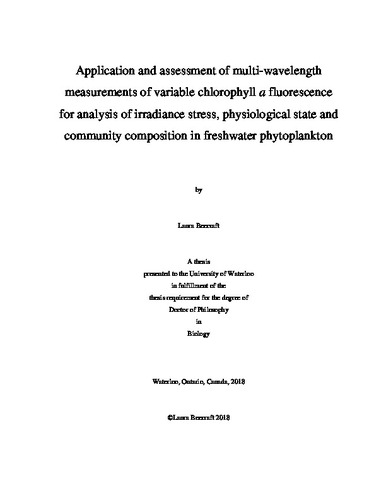 Phytoplankton are a diverse group of organisms of fundamental importance in aquatic ecosystems. Exposure to high levels of photosynthetically active and ultraviolet radiation (PAR and UVR) is unavoidable for most phytoplankton and can result in photoinhibition, an irradiance-dependent loss of photosynthetic capacity that leads to decreased growth and productivity. Chlorophyll a (Chl a) fluorescence can provide fast and efficient measurements of the abundance, composition and photosynthetic ability of phytoplankton, with the maximum quantum yield of photochemistry (Fv:Fm) providing quantification of photoinhibition and other stresses. Multi-wavelength fluorometry targeting photosynthetic accessory pigments characteristic of major phytoplankton groups has potential to provide estimates of group-specific abundance and photosynthetic performance. A multi-wavelength Pulse Amplitude Modulated fluorometer (Phyto-PAM) was used in this thesis to measure the sensitivity of Fv:Fm of phytoplankton pigment groups in natural assemblages to photoinhibition by PAR and UVR, while simultaneously assessing the group-discrimination abilities of the instrument when applied to complex assemblages. Analogous experiments were used to evaluate the PAR and UVR responses of thirteen laboratory cultures, comparing sunlight sensitivity within and among pigment groups, and with the examined natural communities. The effects of taxon and light exposure on multi-wavelength fluorescence excitation spectra (FES) and associated uncertainty in pigment-group estimates were tested, and Phyto-PAM discrimination abilities were further challenged using different FES settings, relative pigment-group contribution and light exposures. Estimates of pigment group abundance in natural communities (Hamilton Harbour) were similar to independent measurements by microscopic analysis, but the instrument could usually estimate Fv:Fm only for the dominant group. Light treatments including the UVR wavebands caused the highest levels of photoinhibition. Relative pigment group sensitivity was consistent between laboratory cultures and field data, with cyanobacteria the most sensitive, chlorophytes the least, and chromophytes intermediate but variable. The results suggested that the sunlight tolerance allowing some cyanobacteria to form surface blooms is not due to innate resistance of Photosystem II (PSII) to photoinhibition, but supported observations of resistance to sunlight stress in chlorophytes. In laboratory populations (cultures), variation of FES among taxa within pigment groups was greater than the variation induced by experimental irradiance exposures, especially for variable fluorescence spectra, and posed the larger challenge to correct measurements of group composition and photosynthetic ability. Group-specific fluorescence estimates were within 10% of true values on average using a variety of FES settings. However, up to 20% of fluorescence was mis-attributed in some cases, and Fv:Fm was estimated for a group not present up to 30% of the time on average. In simple mixtures of two or three uni-algal cultures, group-specific abundance estimates were within 10% of true values 61 to 74% of the time. Fv:Fm estimates were often within 10% of true values for the dominant taxon, but errors increased for taxa at low levels of relative abundance. Group-specific estimates of abundance by Phyto-PAM proved robust, but the scope for errors in quantifying composition and assigning Fv:Fm in some cases was large and highlighted the value of replicate measurements and the continued need for independent verification.